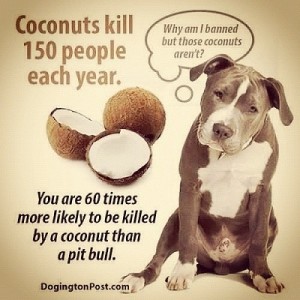 A STRAIGHT DOPE CLASSIC FROM CECIL’S STOREHOUSE OF HUMAN KNOWLEDGE

Are 150 people killed each year by falling coconuts?

During a recent ABC television report about how infrequent shark attacks really are, we were told, “Each year coconuts falling from trees kill 150 people.” That sounded absurd to me. Could it be true? If so, what is the cause of death?

This has gone on long enough. It’s about time somebody spoke up for the coconuts.

OK, getting hit by a coconut is no laughing matter. But nowhere does Barss say that 150 people get killed by coconuts each year. He provides an anecdotal account of one such death and in a separate paper estimates that over a four-year period five deaths in his hospital’s service area were related to coconut palm trees (including climbers falling out of them). A recent report (Mulford et al, “Coconut Palm-Related Injuries in the Pacific Islands,”ANZ Journal of Surgery, 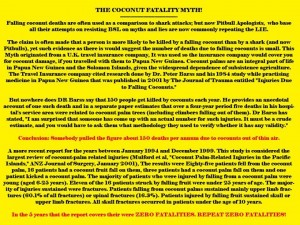 January 2001), which describes itself as “the largest review of coconut-palm related injuries,” also reports no deaths and on the question of mortality merely cites Barss. Given that Barss’ hospital in Papua New Guinea served a population of 130,000, one conceivably could project 150 deaths over that portion of the world population living in proximity to coconut palm trees, but I’m not aware of any systematic attempt to do so. Noting that death reports in tropical countries are limited, Barss tells me, “I am surprised that someone has come up with an actual number for such injuries. It must be a crude estimate, and you would have to ask them what methodology they used to verify whether it has any validity.” Conclusion: Somebody pulled the figure about 150 deaths due to coconuts out of thin air. Take that, shark lovers. 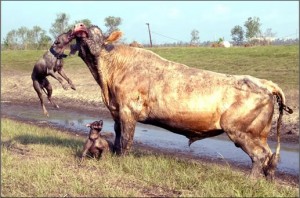 The ‘bull and terrier’ type was originally developed in England in the early 19th century. The lineage goes back to the mastiff / molosser types, including what we now call the Olde English Bulldogge, that were used for bear-, bull- and horse-baiting from the 12th through the 18th century. This isn’t the bear-baiting we think of today, when hunters feed bears in order to bring them out in the open to shoot them. Rather, the bear, bull or horse was confined in a public arena where the mastiff ‘bulldogs’ would slowly tear them apart alive for the public’s amusement1,2,3,4,5.