D.A. to review case of girl killed by dog outside Pittsburgh 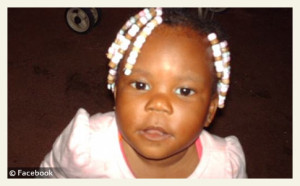 WEST MIFFLIN, Pa. —  A district attorney will review the case of a 2-year-old girl who was fatally mauled by a dog outside Pittsburgh Sunday night.

Allegheny County police and the Medical Examiner’s Office say the dog attacked Tay’lynn DeVaughn inside a home on Fleetwood Street in West Mifflin around 8:45 p.m. Sunday.

“I came out of the kitchen and the dog dropped the baby. His name was Jake and my baby was gone,” said Cory DeVaughn.

DeVaughn told Channel 11’s Jennifer Tomazic that a pit bull mix owned by the boyfriend of the toddler’s aunt attacked his daughter.

DeVaughn quickly called 911, but there wasn’t much medics could do. The girl was pronounced dead at Jefferson Memorial Hospital.

Pit Bull Kills Toddler
West Mifflin, PA – On Sunday evening, 2-year old TayLynn DeVaughn was viciously attacked and killed by a family pit bull-mix while visiting her aunt’s home on Fleetwood Drive in West Mifflin, a Pittsburgh suburb. The pit bull belongs to her aunt’s boyfriend. The child’s father, Cory DeVaughn, told WPXI, “I came out of the kitchen and the dog dropped the baby. His name was Jake and my baby was gone.” The toddler was rushed to Jefferson Memorial Hospital and pronounced dead.

The distraught father also said that it was the second time his daughter had been around the pit bull-mix. DogsBite.org adds, the second time and last time. DeVaughn said he doesn’t blame the owners and that everyone is hurting right now. “She has a lot of people that love her a lot. People all over love my baby,” DeVaughn said. Allegheny County police said the county district attorney’s office would review the case for possible charges once the police investigation is complete.

TayLynn DeVaughn, 2-years old, was attacked and killed by a pit bull while visiting her aunt’s home in the 3900 block of Fleetwood Drive. She was transported to Jefferson Hospital where she was pronounced dead. A subsequent autopsy showed that TayLynn died from multiple sharp wounds and multiple blunt force injuries to the head and neck as a result of the dog attack. Her death was ruled accidental by the medical examiner’s office. The child’s father, Corey DeVaughn, told the media that the day of the attack was the second time his daughter had been around the pit bull. He also indicated the dog was a male, calling the animal “Jake,” which suddenly attacked his daughter. “I came in the living room and the dog was just shaking her,” DeVaughn said. “When he let her go, she was gone,” DeVaughn said. West Mifflin animal control officer Ken Ferree, who impounded the dog, said the dog was a 3 to 4-year old pit bull-mix and weighs about 80 pounds. The dog is expected to be euthanized. [source citations]