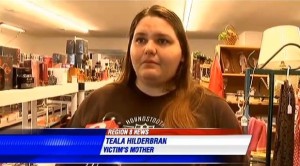 HOXIE, AR (KAIT) – A Hoxie toddler is recovering after her family’s newly adopted dog attacked her on Saturday.

The child’s mother, Teala Hilderbran, said her family only had the dog 3 days before it attacked her daughter.

Hilderbran said the dog showed no signs of aggression prior to the attack.

When the attack happened, Hilderbran said she was upstairs talking to her husband while her daughter was downstairs with the dog.

Hilderbran said she knew something was wrong when she heard her 4-year-old daughter screaming.

“She grabbed her face and she had blood all over her hands, arms and just running all over her face,” Hilderbran said. “She said mommy, she snapped at me. I called 911 and told them where we were at and that they needed to hurry.”

Hilderbran said she watched her daughter as her husband tried to catch the dog so he could kill it.

“It tried to kill our baby,” Hilderbran said. “What else were we supposed to do?”