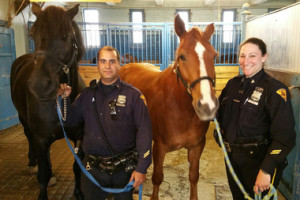 EAST NEW YORK (WABC) — An NYPD police horse is recovering after being attacked by a pit bull in Brooklyn Wednesday.

Officer Luis Ramos and his horse Pompey II were en-route to the 75th Precinct on Sutter Avenue in East New York.

In the vicinity of Essex Street, police say the pit-bull charged at Pompey II, biting the stallion in the right chest area and his inner left leg, causing puncture wounds and abrasions.

Mounted officer Laurene Bove was riding her horse, Limerick, nearby when she witnessed the attack and came to aid Pompey II.

The officers eventually got the dog to retreat back into the yard at 490 Essex St., where the owner was able to grab the pit bull.

Pompey II was taken to a stable in Brighton Beach where a veterinarian will treat him.
Click here to read more

The owner of the pit bull, who wasn’t identified, was able to secure the dog. The canine was taken to a local New York Animal Care & Control, or ACC, facility where it will be evaluated, according to police. An NYPD spokesman didn’t know if the dog was up-to-date on its vaccinations. A spokesman for ACC didn’t immediately return an email for comment.

A police horse is recovering with “a few extra apples and carrots” after being bitten twice by a pit bull on Wednesday while on patrol in the East New York area of Brooklyn, police said.

Pompey II was taken back to the stables in Brighton Beach, Brooklyn, where he was treated by a veterinarian. He is expected to make a full recovery after a few days’ rest.