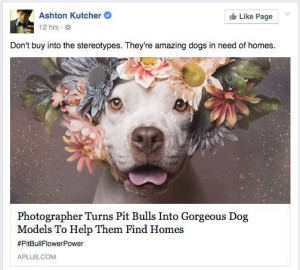 A recent Facebook post of yours was brought to my attention by a concerned advocate of victims of pit bulls. In your own words, you encouraged your friends and fans to “look past” and ignore the pit bull stereotypes; to consider owning one as a pet. As a parent of a child that was fatally mauled by two well-loved pit bulls, I find your post alarming. You have recently become a new father yourself. I would like to share with you, my son’s story.

Before March 6th, 2013, I thought very little about pit bulls. I knew they could be somewhat aggressive towards other dogs, but had heard that they were great with people. My friend owned two pit bulls that I had met several times. When I visited, I felt very comfortable with her dogs as she had owned them since they were puppies.  They had never shown aggression and they sometimes played with friend’s dogs in the fenced area behind her house.  They were three years old, well cared for and neutered.  Until that fateful day these were very mild mannered, normal canine pets.

Occasionally I allowed my friend to babysit my son, Daxton. My biggest concern with the dogs was that they could knock over my son due to their size. By all accounts, the dogs were well behaved, well cared for, very much loved, and trained to follow commands. If you would have talked to me on March 5, 2013, I probably would 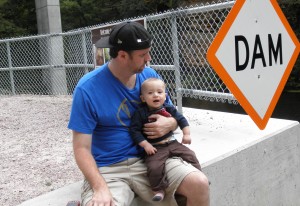 On March 6th, my world changed forever. While my friend was carrying my son in her arms, she called her dogs in from their bathroom break from their outdoor run. Her dogs started to become aggressive and jump on her. They tore Daxton from her arms and launched a fifteen minute attack on my child. They ripped off his clothes and diaper. They mauled half of his face, and they severed his spinal cord. During this savage assault, my friend tried to fight off her pit bulls with no success. In their frenzy, they did not obey any of their commands or even respond to their names. They were focused solely on my son, their “prey”. She eventually extricated Daxton from the dogs and he was transported to the medical facility. From the hospital, he was taken by life flight to the Children’s Hospital in Milwaukee. He died that day at 14-months old.

I couldn’t imagine in my wildest dreams that I would lose my son this way. At first I was told that this was just a “freak accident”, but after extensive research, I came to learn that my son was the 285th American killed by pit bulls since 1982. Pit bulls are responsible for the majority of human and animal dog related deaths. This wasn’t a “freak accident”, but a preventable death. Like most of the public, I wasn’t aware or adequately educated about this breed of dog. 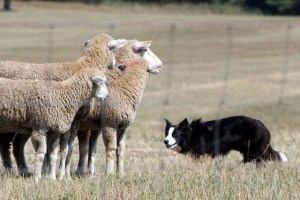 The “stereotypes” about pit bulls are true and accurate. They are supposed to be true because a dog breed is based on a stereotype. The whole concept of dog breeds is based on breed traits crafted through decades of selection for appearance, correct form and function. While each dog does have an individual personality, they are also bred for specific behaviors. The whole notion is that the majority of Spaniels, Retrievers, Beagles, Border Collies or plain old lap dogs will behave in a manner consistent with their breed. For the most part, this is true. When you see a Labrador Retriever with a tennis ball in its mouth or playing in water, those are breed specific behaviors. When you see a Beagle following scent or hear it baying in the back yard, those are breed specific behaviors. When you see a Border Collie nipping at the heels of other animals or children that is a breed specific behavior. Each breed has a purpose and pit bulls are no exception. For centuries, they were bred for bull baiting and dog fighting. When they bite something, they do not puncture and release, they grip, shake and tear. This causes devastating injuries very quickly. When it comes to dog attacks, breed does matter. Click here to read the American Pit Bull Terrier breed bio from our website. I highly encourage you to take a moment to read it. 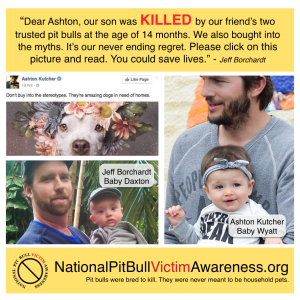 As a public figure, you have a great deal of influence and a tremendous following. Millions of people will read your Facebook post and many of them will believe your words. You will reach more people than I ever could. As a fellow father, I am asking you to hold off on future comments or posts about pit bulls until you fully research and understand the breed. It could make the difference between life and death for another family. This year alone 22 people have been killed by pit bulls, including 8 children and thousands of others have been mauled. The year my son was killed, he was 1 of 16 children killed by pit bulls. These numbers do not even include the near 50,000 animal victims per year. We all live downstream and you have the opportunity to prevent a death from a pit bull mauling.
I wake up every morning regretting my decision to let Daxton near pit bulls. I will never see my beloved son grow up and I will forever mourn everything that could have been. There is an enormous hole in me that will never be filled. I share with you my son’s story in hopes of preventing another family from going through the intense anguish my wife and I have been through.

I am available to answer any questions or to provide documentation and sources to my claims. Please feel free to reach out or to visit my website at Daxtonsfriends.com.