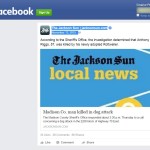 According to the Sheriff’s Office, the investigation determined that Anthony Riggs, 57, was killed by his newly adopted Rottweiler.

November 13, 2015
Click here to read post
Facebook commenter and witness Teresa Sanchez wrote: “He wasn’t growling or showing teeth, he just bit us like he did it all the time or something. It was unreal what that dog did and he should have NEVER been adopted out period.”

The Madison County Sheriff’s Office responded about 3:30 p.m. Thursday to a call concerning a dog attack in the 2200 block of Highway 70 East.

According to a news release, the investigation revealed that Anthony Riggs, 57, was killed by his newly adopted Rottweiler.

Deputies found Riggs on the floor and unresponsive, the Sheriff’s Office said. Emergency Medical Services pronounced him dead at the scene. The dog had to be put down on site. 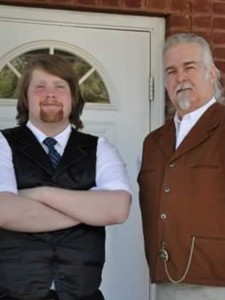 Anthony Riggs, who was killed last week by his newly adopted dog, was a good man who loved animals and was loved by them, according to his ex-wife.

“He never hesitated to be with dogs,” said Adrienne Riggs, Anthony’s ex-wife. “Sometimes I thought he related to dogs better than to people.”

During her marriage with Anthony, they owned many dogs, including a Rottweiler, a Doberman, a wolf-mix and more, Adrienne said.

Anthony Riggs, 57, adopted a 5-year-old male Rottweiler on Thursday from Jackson-Madison County Rabies Control, which is the county-run animal control facility, according to the Madison County Sheriff’s Office. The dog attacked and killed him later that same day, the Sheriff’s Office said.

Anthony had brought the Rottweiler to show Thomas around 10:30 Thursday morning, Adrienne said. Father and son had made plans for the holidays, hugged and said they loved each other.

At about 3:30 that afternoon, Madison County sheriff’s deputies responded to the call about the dog attack in the 2200 block of Highway 70 East. Deputies found Riggs on the floor and Emergency Medical Services pronounced him dead at the scene, according to Tom Mapes, spokesman for the Sheriff’s Office.

Mapes said Kathy Riggs, Riggs’ wife, called her husband from work at around 1 p.m., but did not get an answer. When she came home with a coworker, she found her husband dead, Mapes said. 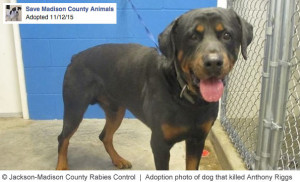 Rabies Control does no evaluation or assessment testing at all. Rabies Control releases animals unaltered and unvaccinated too.1 “Vaccinations and spaying or neutering are arranged by the owner after adoption,” according to Tedford. This is untrue in other states, mandated either by state law or county policies. The current Tennessee law is many years out of date. Tedford even stated that she hoped this deadly attack would not stop people from adopting at the facility!

The director of the county health department is asking the public to accept the risk of death after admitting they have no evaluation policy.

What more could stop people from losing faith in a public pound than adopting out a dangerous breed with an unknown history, with no evaluation or testing, that in 3-hours kills its new owner? State-of-the-art temperament tests are not “science,” and they do not measure unpredictable aggression. When administered properly, however, they can provide insights into the dog’s behavior. Temperament tests are the very least a county shelter can do to protect public safety.