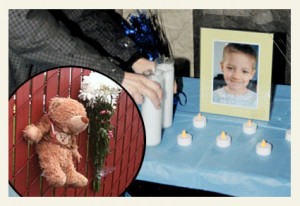 Photo by Kathy Orr/Baker City Herald: Ashley Craig helps prepare the memory table with candles during a community gathering Sunday evening for Jordan Micheal Ryan. A picture of the 5-year-old Baker City boy, who died Friday as a result of a pit bull attack at the home of family friend, sits on the table with candles and other decorations.

A huge bundle of bright and colorful balloons was released. As they floated upward and away, at least one person was heard to say “Bye, Jordan.”
Then a few tiny children’s voices, like echoes, were heard to say the same thing.
Once the balloons were enveloped by the dark sky, someone started singing “Amazing Grace” and the entire assemblage joined in.
About 150 people braved cold, wet weather Sunday evening to remember 5-year-old Jordan Micheal Ryan, who died as a result of a pit bull attack at a family friend’s residence on Friday morning.

This public memorial to celebrate his short life was held outside the kindergarten he attended in a wing of Baker High School.
“We have the memories,” said Hank King, Jordan’s great-grandfather.
King also led the group in prayer, then asked for people to share their experiences and thoughts about Jordan.
One person said he had held Jordan in his lap once and the boy was very loving.
Many of the people there cried softly during large portions of the gathering and they were saying very little. Most were parents who had brought their children along.
King hugged and comforted the boy’s grieving father, Nathan Craig, his own grandson, at one point. Jordan’s mother, Michelle Ryan, also attended the memorial.
A small tent allowed them and other close relatives some privacy and shelter from the rain after King finished speaking.
It also served as a dry spot for Jordan’s picture and other decorative items to be displayed alongside candles.
The weather made it difficult for everyone outside to keep their candles lit but there weren’t any audible complaints. People just simply lit them again.
Next to the tent was a fence that served as a memory wall. It contained toys, balloons and ribbons. Children were signing the balloons hanging there as well as some of those sent skyward.
The pain Ryan is going through right now is something “I couldn’t imagine,” said Cassie Glerup, one of the organizers. “It kind of hit home.”
This is why she wanted to do something for Jordan’s family and the rest of the community, she explained.
Glerup, Autumn Brooks and Michelle Fouts moved quickly to get the event together. They began working on Saturday morning.
Social media was used to spread the word about the event. It did so widely and quickly, Glerup said.
But she waited until Saturday to break the news to her daughter, Madison.
The girl, in the same kindergarten class as Jordan, was among the young cheerleaders who performed during Friday night’s Baker High football game.
Glerup didn’t want to ruin it for her.
Brooks talked about something unusual that occurred as she went about various tasks ahead of the gathering.
“When I went to print off a poem and picture of Jordan the most amazing thing happened,” she wrote afterward. “The poem printed and at the bottom it said ‘In memory of Jordan.’ I never put that on the picture. I didn’t write it.
“Our world is a wonderful world. I can’t explain how it got there,” she added.
“This type of thing — people coming together to help one another — is so important at times like these, to help with the grieving and help people see what we mean to one another,” said Desteni Felton, in a written message afterward. And Heather McCoy, who attends Harvest Church, said her fellow church members were taking donations for the family and planning a prayer meeting.
Today at school, there were going to be grief counselors available to talk to any children who might be troubled about Jordan’s death, said School Superintendent Walt Wegener.
“We just want to take care of our kids,” he said.
Wegener and School Board Members Kyle Knight and Richard McKim were among the community members attending the memorial.
Baker 5-J doesn’t hold classes on Fridays.

Canine to be euthanized

The District Attorney’s office stated that the state medical examiner determined that 5-year-old Baker City youth Jordan Ryan “suffered extensive injuries, which caused him to bleed to death” from a pit bull attack that occurred on Friday morning at a home in the 1900 block of 14th Street. “As a result of the incident the dog will be euthanized,” according to a press release sent out today. The dog was impounded soon after the incident. “Once the (police) investigation is complete I will review the case for potential criminal charges, or determine whether the case needs to be presented to the grand jury,” said District Attorney Matt Shirtcliff.

-Mother of boy killed in pit bull attack speaks out

–It was reported today in the Baker City Herald that a Baker County grand jury declined to indict Mary Lane, the owner of the pit bull that brutally mauled to death 5-year old Jordan Ryan on September 27