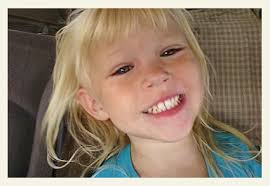 A beautiful, bubbly 4-year-old Prairie City girl, Jordyn Arndt, already known for her love of animals and passion for the outdoors, died Tuesday after a gruesome and senseless mauling by her babysitter’s Pit Bull, described as a Staffordshire Terrier, named “Brutus.”

Jena Wright, 24, was supposedly watching Jordyn while her mother, Jessica Arndt, was at work.

Jordyn was airlifted to Mercy Medical Center in Des Moines after the baby sitter‘s 911 call, “We need an ambulance.” But doctors could not save her life, The Des Moines Register reports.

Jordyn was attacked about 2 p.m. on Monday at the house where the babysitter lived at 300 S. Marshall St. in Prairie City, police said. The little girl died about 11:30 a.m. Tuesday with her family by her side. “She fought so hard,” the girl’s mother, Jessica Arndt, told The Register. “She is loved and will be missed.”

The American Kennel Club describes American Staffordshire terriers as “courageous and strong.” The breed is “loyal to his family and will protect them from any threat,” according to the AKC’s website.

It is hard to believe that a four-year-old child could have been considered a “threat” to this powerful breed of dog, described, according to the AKC, as a “pit dog” and a “Pit Bull Terrier.”

Jena Wright pleaded guilty of possession of a controlled substance and was sentenced in April 2012 to two days in jail, court records show, according to the report.

Jessica Arndt said Wright called her Monday afternoon to tell her Jordyn had been injured. She said she and other family members spent Jordyn’s last hours by her side. But, she said there was no conversation, because Jordyn was unconscious after the attack by the Pit Bull.

“When it was time, toward the end, we just told her she was going to a better place, and people loved her up there and would take care of her,” Arndt said.

On Monday, after the attack, Chief Modlin said he served a letter to Harmon Wesley Wright III and Jena Wright, telling them the Pit Bull was considered dangerous and cannot be kept within the city limits.

Brutus is currently in quarantine at a veterinary clinic in Newton, Modlin said. The Chief declined to comment on whether authorities have had previous complaints about the animal or its owners, due to the ongoing criminal investigation, the Des Moines Register reports.

However, he did say city officials would review their animal control policies in the coming days.

A neighbor, Angela Clark, who runs a child care facility in her home on Madison, across from the house where Jordyn was killed, told the Register that she only saw the dog outside occasionally and it seemed to be properly cared for. After this incident, she said she believes tighter restrictions on the types of dogs allowed within city limits are needed.

“With that breed of dog, red flags would be raised for me around children in the neighborhood that we live in,” she said.

Little Jordyn Arndt enjoyed running, swimming and playing in the dirt, her mother said. Like most little girls, when she was inside, Jordyn was often coloring, playing house and playing with dolls. “She loved to wear dresses, but yet she could be out there with the boys,” her mother said.

Jordyn is also survived by her father, Jason, and her brother, Aden, 7, Jessica Arndt told reporters.

Arndt said she hasn’t spoken with Wright since the incident but has been told Wright is not doing well.

“I don’t want to put any blame on her, because it was an animal,” Arndt said. “I’m sure they’ll do their own blame, as far as investigation-wise. I’m not going to do that.” Jordyn’s mother said that Jena Wright needs a lot of prayers.

On Tuesday, two dirt-splattered vehicles sat in front of the Marshall Street home, writes the Des Moines Register— a Jeep 4×4 at the curb and a Fisher-Price tricycle in the front lawn. Also in the yard was an orange-and-black stroller turned on its side and a coiled-up dog leash.