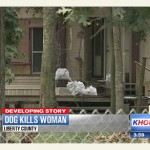 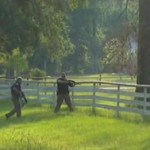 DAYTON, Texas — Two KHOU crews were just feet away from a Liberty County deputy when he shot and killed a dog.

The Rottweiler–Mastiff mix was responsible for a deadly mauling on Monday.

Deputies say the dog had been a stray until a woman in the Woodland Hills subdivision began feeding him about two weeks ago.

63-year-old Linda Oliver called authorities after the dog attacked her, but it was too late.

“I love my dogs, but something like that happens to a human being, it needs to be put down,” said neighbor Steve Wilson. Deputies shot at the dog named “Bruiser” at Oliver’s home on Monday. Deputies say the dog charged at them and managed to escape into some nearby woods.

Deputies had been actively searching for the dog ever since.

Several near captures ended with the dog running off into the distance. On Tuesday night, around 6:30 p.m., it all came to an end on County Road 648.

Two KHOU crews covering the story followed a deputy to that location.

Less than a minute later, the dog ran down the street and deputies followed in hot pursuit.

A Liberty County Deputy, crouched in a ditch, killed the animal with two shots fired from a 12-gauge shotgun.

KHOU cameras rolled as the shots went off, and a deputy officially confirmed out loud that the dog was dead.

“I think it’s a tremendous relief off of everyone. I have gotten numerous calls from parents who have small children and small pets,” said Capt. Ken DeFoor with Liberty County Sheriff’s Office.

DeFoor says the animal was so dangerous he left deputies with no choice.

“Had he been brought down with a tranquilizer and captured, we would’ve still had to send his remains for rabies testing,” explained Capt. DeFoor.

The animal remains are now on the way to a lab.

If the dog did in fact have rabies, deputies are concerned about other pets he might’ve come in contact with.

-Video Captured of Deputy Shooting and Killing Dog that Mauled

*Rottweilers require intense and rigorous training from a very early age.  These canines need a physically strong, consistent leader or handler. Their size and power should always be taken into consideration in all situations and circumstances. Due to the delicate nature of interactions with other animals, it is not recommended that Rottweilers participate in dog play groups or dog parks. They need a secure fenced yard. Invisible fencing is not appropriate or dependable to protect the dog as well as children and other animals that may wander onto the premises. Proper fencing is not only to protect the dog, but for the public due to the Rottweiler’s intense guarding instinct.  They can also be trained to accept visitors eagerly; however, if they sense anything out of the ordinary, interactions can quickly escalate to aggression. A slow and gentle introduction to strangers is a highly recommended as a safety precaution. Despite all the positive qualities Rottweilers possess, they can be difficult to own and may not work well as family pets, especially if there are small children in the household.

*Bull Mastiff’s are extremely powerful dogs and training and socialization is an absolute necessity to manage them effectively. Bull Mastiffs are more dominant and assertive than other Mastiff breeds. They need assertive, but not overly harsh leaders. They can be extremely sensitive to the tone of the human voice.  Passive or meek owners can quickly lose control of the dog and that can create highly dangerous situations. The same goes for people who are physically small – it is simply not possible to control a dog that weighs almost as much as or more than the owner.