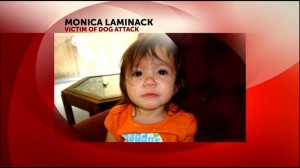 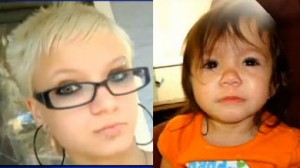 ELLABELL, Ga. — A toddler who slipped outside through a doggie door was mauled to death by her family’s seven dogs in the backyard while the attack went unnoticed by the child’s mother and other relatives inside their home, a southeast Georgia sheriff said Thursday.

Bryan County Sheriff Clyde Smith said the child’s grandmother told investigators she was lying in bed when she heard the pit bulls and pit bull mixes barking, and she looked outside her window to see them dragging the girl. Smith said she began yelling, “They’re killing Monica!”

It was too late. Monica Renee Laminack, who would have turned 2 on June 1, was dead by the time an ambulance arrived Wednesday evening. Animal control officers used drugs to euthanize the dogs at the home on a rural road in tiny Ellabell, about 30 miles west of Savannah. Deputies found the girl’s shoes, diaper and shredded clothing scattered across the fenced-in yard, Smith said.

“They had dragged the child all over the yard. … They tore her clothes all up,” Smith said.

The toddler lived in a modest, two-story house tucked away from the main road. The sheriff said four generations of the same family shared the home, including the child’s 18-year-old mother, grandparents and two uncles who are still young boys.

The girl’s grandmother, Michelle McIntyre, sat weeping on the tailgate of a pickup outside the home Thursday. Summer Laminack, the child’s mother, sat next to her staring silently at the ground.

“She’s in shock,” Barbara Brauda, a friend who was visiting the family, told The Associated Press before a man approached and asked a reporter to leave the property. “She hasn’t been doing a whole lot of crying because she’s still numb.”

The sheriff said at least three adult relatives were inside the home when the dogs killed the girl outside. No criminal charges had been filed Thursday. Smith said he expects charges will be brought after he’s had a chance to discuss the case with the district attorney and the girl’s family has been given time to hold her funeral.

“I can see child neglect at the very minimum,” Smith said.

Relatives told investigators the dogs that mauled the child were essentially family pets – a mother dog and six offspring from a litter she had about 16 months ago, the sheriff said.

The dogs had their own doggie doors that let them come in and out of the house as they pleased. The family told deputies the dogs had never attacked a person, though one of them might have killed a cat, Smith said. He said relatives insisted the toddler would play with the dogs and even “use them as pillows while watching TV.”

Smith said the dogs looked healthy and well-fed, and investigators found no signs they were being used as fighting dogs by their owners.

“They said they have never been aggressive to other people,” he said. “Why they got started I have no idea.”

Christy Lamica lives across the street from the home where the girl was killed. She said she’s seen neighbors walking pit bulls on leashes along the street but isn’t sure where the owners live.

“Everybody on this street has dogs, and everybody pretty much keeps to themselves,” said Lamica, who said she doesn’t know the family of the mauled toddler. “Their dogs don’t get out, and we never hear anything from them. I’m home all day, and I’ve never had issues.”

*The ‘bull and terrier’ type was originally developed in England in the early 19th century. The lineage goes back to the mastiff / molosser types, including what we now call the Olde English Bulldogge, that were used for bear-, bull- and horse-baiting from the 12th through the 18th century. This isn’t the bear-baiting we think of today, when hunters feed bears in order to bring them out in the open to shoot them. Rather, the bear, bull or horse was confined in a public arena where the mastiff ‘bulldogs’ would slowly tear them apart alive for the public’s amusement1,2,3,4,5.