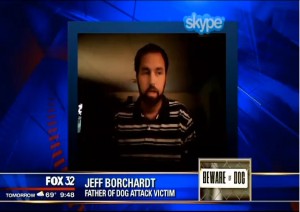 FOX 32 News talked Tuesday with Jeff Borchardt, a Wisconsin man who’s 14-month-old son Daxton was attacked and killed by two dogs at his babysitter’s house. The dogs were pit bulls who Borchardt said had been raised well. He knew the dogs and said they were nice. He had no concern about them being around his son. Then came the attack.

Borchardt is now an advocate for canine education. His group does not call for a ban on pit bulls. However, he said much more awareness of the danger is needed.