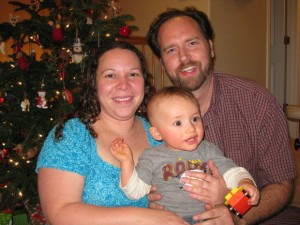 Jeff and Kimberly Borchardt, of Wisconsin, with their 14-month-old son, Daxton, who was mauled to death by two pit bulls. (Submitted photo)

While Jeff Borchardt was at work on March 6, 2013, a close family friend who babysat his son, Daxton, dressed the 14-month old and put on his jacket and hat.

Even though the two pit bulls the babysitter raised from puppies had never shown signs of aggression, as a precaution, Daxton Borchardt was not to be around the dogs, Jeff Borchardt said.

But after the baby sitter dressed Daxton, she picked him up and decided to let the dogs out of her house in Walworth County, Wisconsin, Borchardt said.

She also had Daxton in her arms when she called the dogs back into the house, he said, and that’s when everything went wrong.

Without warning, the dogs attacked.