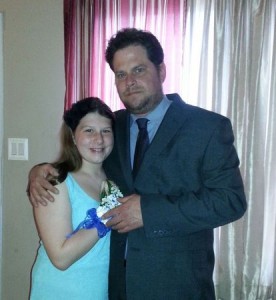 Adara Johnson, left, and her father, Bill. Adara had her face sewn back together with more than 75 stitches after a pit bull attack. She will face scar minimization surgery in a few years. (Submitted photo)

Bill Johnson said he knew the family had dogs, but he had no idea it had a pit bull when he dropped his 10-year-old daughter off at her friend’s house in Philadelphia on Dec. 7, 2012.

About 90 minutes later, Johnson said he was on his way back over to the house because his daughter, Adara, had been bitten in the face by the same pit bull.

Johnson pulled up, parked behind the ambulance, and he said the first paramedic he met told him Adara had been bitten by the dog and would need a few stitches.

When the paramedics brought Adara out, her head was covered, and Johnson said he hopped in his car and followed the ambulance to the nearest hospital.

The first time Johnson said he saw his daughter’s face was in the emergency room. Her whole face had been mauled, and it had been torn from her ear to the corner of her lip, he said.