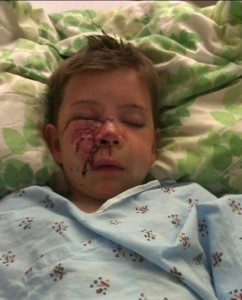 Seven-year-old Sport Kim was viciously attacked by his aunt’s pit bull on May 18, 2013. It took more than 1,000 stitches to sew up his face and he must undergo five facial surgeries before his treatment ends, his mother, Jennifer Kim said. (Submitted by Jennifer Kim. )

So Kim decided to round up the family and go visit the canine in the small town of Maryville, Tenn.

Kim’s husband, Samson, hadn’t planned on going because he knew pit bulls could be dangerous. But he changed his mind. He wanted to be there just in case.

So Jennifer and Samson Kim, along with their daughter, and 7-year-old son, Sport Kim, headed out to meet the newest addition to the family on May 18, 2013.

When they got there, the dog was anything but welcoming; it started barking, to the point where Jennifer Kim’s sister had to put the pit bull in the kitchen.

But the dog didn’t quite make it there.

Out of nowhere, Jennifer Kim said the dog lunged from her sister’s grasp, jumped over a coffee table and latched on to her son’s face as he stood up from the couch. The dog sunk its teeth in and wasn’t letting go, she said.