CRYSTAL RIVER, FLA. — A sign posted on the fence of a home down a dirt road in Crystal River reads, “BEWARE of Dog.”

Saturday around 4:20 p.m. the warning became a reality after Citrus County Sheriff’s Office deputies, Fire Rescue and EMS responded to the house after a two-year-old boy, Christopher Camejo, was killed by dogs in his own yard. Several distraught family members rushed to the scene including the grandmother of the victim. She could be heard yelling, “Oh God no.”

Evidence technicians had a bright light over the scene where the child died which appeared to be on the side or the back of the Crystal River home located at 8352 West Oak Street. According to reports the parents of the child, Christopher Camejo and Claudia Scarborough were both inside the home along with friends their two other children when the attack happened.

Christopher Camejo was found to be in violation of an injunction for protection and was taken into custody. The injunction had been served in another county on behalf of Claudia Scarbrough.

Animal Control Officers responded and removed four Rottweilers and another dog from the home. A Chihuahua and several puppies were left at the home.

DCF was notified of the incident and the two children, ages 1 and 5, were taken into protective custody.

It is truly heartbreaking when we lose a loved one, but nothing shy of devastating when we lose a CHILD..
Little Chris lost his life on Saturday to a vicious dog attack, and we only want to be able to lay his body to rest in peace.  He was taken from us to soon, and we pray that you will all find it in your hearts to donate so that he can be with the angels.. He was only 2 years old, but in that short amount of time, he managed to win our hearts and he will always be remembered as our little Pee-wee.  That was his Fathers nickname as a child, to which Little Chris reminded us all because he was the spitting image of his Dad.. Please help us to give him what he deserves, his place in heaven. God bless you all. Thank you from all of our family.

Donate to the family: http://www.gofundme.com/iemc8o 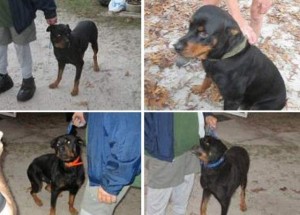 12/10/14: Grandfather Speaks Out
The Citrus County Chronicle reports new information in today’s update. The boy’s grandfather, Joaquin Camejo, is heartbroken. “He was everything to me, everything — everything I can imagine,” he said. Christopher Camejo, 2-years old and his first grandson, was mauled to death by up to four of Joaquin’s rottweilers on December 6. Joaquin said he first heard the news of his grandson’s death when returning from a fishing trip. His son desperately called him on the phone.

“My son called and said, ‘dad, dad, my son is dead, your dogs killed him. I just threw up my hands and started crying.” – Joaquin Camejo

Prior to leaving for the fishing trip, Joaquin said he locked up two of his rottweilers — the two he believes killed the boy — in his backyard in a “special pen.” The two dogs, a male and a female, were siblings, according to Joaquin. He believes the two were trying to establish pack order and seemed more aggressive. He said his dogs had never shown aggression toward his grandson, even slept with him, but he was still cautious when his grandchildren were around the dogs.

Christopher Camejo Jr., 2-years old, was mauled to death by his grandfather’s rottweilers. The boy was dead in the backyard when emergency responders arrived. Four rottweilers and a smaller dog were also loose in the backyard. Authorities confiscated all five dogs, but left several rottweiler puppies in the home. The toddler was alone when the deadly attack occurred.

Sources for the death of Christopher Camejo:

Read more about the Rottweiler: https://www.daxtonsfriends.com/rottweiler/