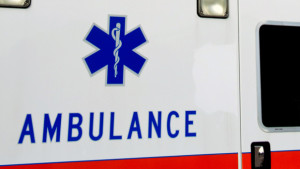 A 2-month-old boy was killed Sunday afternoon and his mother was injured when the family’s pit bull attacked the child inside their Dallas home, police said.

Police said a man left his son — later identified as Brayden Wilson — alone with the dog as he went outside to turn on their sprinkler system at their home on the 6800 block of Beechnut Street.

When the man walked back into the house, the dog was attacking the child as he sat in a bouncing chair, police said.

The dog then attacked the boy’s mother, biting her twice.

A tragic deception has been perpetrated on the American public, says Colleen Lynn of Austin.

And the gruesome consequences were seen in Dallas last weekend.

In a scene almost too sickening to imagine, a 2-month-old baby in a bouncy seat was attacked and fatally mutilated by the family’s pit bull.

The baby’s grandmother expressed the family’s complete shock. The dog had been in the family and around other children for eight years without problems, she said.

But it’s no surprise at all for Lynn. In fact, it’s disgustingly familiar.

“It’s what they always say. They’re always shocked,” she said.

“People buy into this idea that it’s all in how you raise them. That’s the bottom-line propaganda,” she said. “But it’s just not honest. It denies all the heritage of the breed. For centuries, these dogs were bred to attack and to kill.

“We all do breed research before we buy a dog. That’s just normal. We understand breed traits. But there’s this big cover-up about pit bulls.

“If people had more complete information about these dogs, they would make better decisions — parents especially,” she said.

DALLAS (CBSDFW.COM) – A pit bull attacked and killed a Dallas toddler Sunday afternoon, after the dog was left along with the child for a few minutes, according to the parents.

Police say the father grabbed the dog by the neck, took it outside and shot it twice.

No word on the mother’s condition. 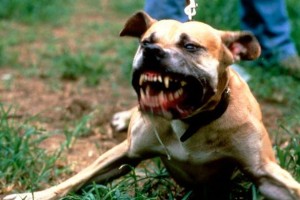 Brayden Wilson a two month old baby boy has died after being mauled to death by the family pit bull at home in Dallas, Texas, Sunday afternoon.

Police say the boy died when the child’s father went outside to turn on a sprinkler system.

At present it is not necessarily understood why the family chose to harbor a pit bull dog given the volatile nature of the breed and their observed ability to turn on children. Others meanwhile have argued on the web that no dog’s behavior can ever be fully understood and that no vulnerable child should ever be left alone in their company. 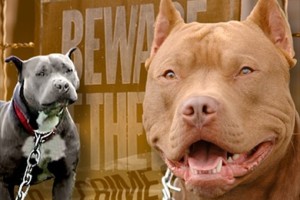 The pitbull attacked the boy, who was in a bouncing seat, while the father was outside.

Police say the boy’s mother was bitten twice by the dog while trying to pull the child away.

The father dragged the dog off of the boy and shot the dog twice outside. Police say the baby was pronounced dead at Children’s Medical Center of Dallas.

DALLAS (CBSDFW.COM) — A 10-week-old baby was attacked and killed by the family’s pit bull on Sunday afternoon in the Red Bird area of Dallas.

Police say the father stepped outside briefly to turn on the water sprinklers. It was then that the dog attacked the infant, identified as Brayden Lamar Wilson, who was sitting in a bouncing seat inside the home.

Brayden was rushed to Children’s Medical Center in Dallas, where he was pronounced dead.

There is no indication on whether any charges will be filed.

Child Protective Services says it received a report and will investigate. At this time, no other children have been removed from the home and there is no CPS history on the family.

DALLAS — Dallas police say a 2-month-old boy has died after being attacked by his family’s pet pit bull at their home.

Police say the baby was attacked Sunday while in a bouncing seat. Police say the child’s father had gone outside to turn on a sprinkler system and when he returned, the dog was attacking the child.

As the father tried to stop the attack, the mother walked in. She was bitten twice by the dog. 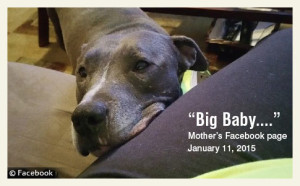 Images of the Dog
UPDATE 04/29/15: On the day this fatal pit bull attack was reported, we located the mother’s Facebook page in Google Cache. At least temporarily after the baby’s horrific death, it had been deactivated from Facebook. Upon checking again last night, the page had been reactivated. As recently as January 11, 2015, the mother posted two consecutive photographs to her Timeline of a male pit bull with a graying muzzle that she lovingly refers to as a “big baby” in both public posts.1

In the two posts, it appears she is referring to the 8-year old dog’s tapering ability to hop up on the couch, “Well….he made it up here…”

The deceptive propaganda about the breed, “It’s all how you raise them,” promoted by pit bull owners, breeders, animal groups, television programs and more, is clearly evoked in these two photographs. This false narrative wholly denies the heritage of the breed, involving centuries of selection for bull baiting then dogfighting. The purposely-bred form and function of a fighting dog is to attack without warning signs, to execute the killing bite and to relentlessly attack until death.

The aging family pit bull that lumbered onto the couch in January, with no history of aggression, had no problem suddenly executing the killing bite a few months later. Latching on to the baby’s head, killing it, was just part of the deadly attack. When the father succeeded in getting the dog to release the baby, the pit bull next attacked the mother who intervened. At some point, the father was able to drag the 8-year old pit bull outside where he shot it to death, ending the attack.

CBS 11 News reported Monday that the family pit bull, named Grady, was 8-years old. The dog had been with the family for nearly a decade and had played with other children before. CBS spoke with the child’s grandmother who said that family members are “in shock” that the pit bull would suddenly turn on the child. The grandmother also told CBS 11 that other children were at the home at the time of the savage attack, but were playing outside and did not see the violence.

“It’s just unexplainable. You just don’t get it when you’ve had the dog so long, I don’t know what could have happened. I don’t know.” – Willetta Tate

Tate said the other children are 8 and 11 years old and had grown up with the dog. “Those kids, they sleep with him and everything,” she said. A similar case occurred in 2013 in Georgia, when a family pit bull of 8-years, named Kissy Face, savagely killed a 2-year old boy. The female, spayed pit bull had known the boy since his birth and his older sister who was 6-years old when the attack occurred. The boy’s mother, Angela Rutledge, later told her painful story to a state legislator.

The video shows Brayden’s mother emotional after returning home from the hospital. “Like I said, kids play with him every day, littler kids, nieces and nephews and I just… I don’t know,” Tate echoed. Then the video cuts to neighbor Chanel Villarreal who also owns a pit bull that she dragged for out the cameras. Because by all means, just after the violent mauling death of a baby by a family pit bull is certainly a ripe time to showcase anecdotal nonsense by a pit bull owner.

Child Protective Services interviewed the family twice. CPS has no prior history with the family.