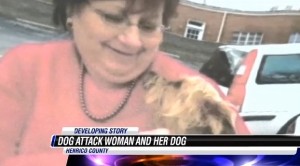 HENRICO, VA (WWBT) – A brutal dog attack has a Henrico woman asking why, and police investigating.

It happened Wednesday night near Moody Middle School in the Lakeside community. A woman says she and her nine-pound dog were attacked by another dog running free in the neighborhood.

There’s still blood on the road where the attack happened.

Witnesses say the attack was so brutal that the other dog pulled Mimi right out of her harness. 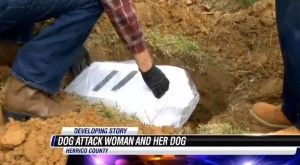 Those are all she has left after a brutal attack.

Wednesday, members of Wainwright’s church buried the little Yorkshire Terrier after the attack that injured Sandra and killed Mimi.

The Henrico woman said she was walking Mimi around 7:30 when she looked up and saw a pit bull behind her.

When she went to pick up her the little dog, she says the pit bull attacked her and Mimi. Eventually, that other dog carried Mimi off.