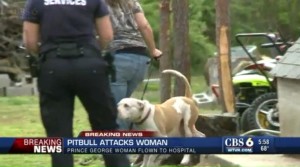 Police said the attack happened Thursday afternoon in the 3600 block of Heritage Road. When the woman went to her mailbox near the roadway, police said the dog attacked and bit her hands and head before she was able to escape.

Elderly woman attacked by neighbor’s pit bull while getting mail 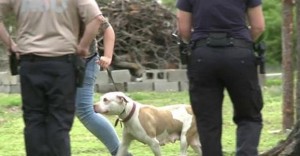 PRINCE GEORGE, Va. — A 92-year-old woman was walking out to get her mail when a pit bull attacked her, according to police on scene.

The neighbor’s female pit bull ran at the woman, according to police, and first bit her on the hand. The woman fell down, and the dog then bit her on her head.

She was able to fight off the dog and get back inside, where she contacted 911.

The victim has been transported to John Randolph Medical Center in Hopewell. Her condition is unknown.

By From Staff Reports – Posted Apr. 17, 2015 at 2:01 AM
The dog was identified as a female pit bull belonging to Lydia Gordon of the 3600 block of Heritage Road. Gordon has been charged with having a dog run at large, having no county license and failure to obtain a rabies shot for the animal. Currently, the dog is being held by the Prince George County Animal Services Unit for the required 10 days for biting. The investigation is ongoing and further charges are possible.
Click here to read more