Skip to content
Home » Blog » Dog Attacks In The News » Neighbors upset over pit bull attack in Freeport, ME (4/8/15)

FREEPORT (WGME) — There is controversy on the coast of Freeport, after a dog that many consider to be a pit bull allegedly attacked another dog. Police are investigating and several neighbors want the owners to get rid of the animal. The dog’s owner, Leslie Davidson, insists her dog is not a threat.

Kristen Bailey thinks it is. She and her son took their labradoodle, Webster, for a walk Easter Sunday, when she says a “pit bull” attacked their dog. Bailey says “The pit bull hit my dog with such intensity that I fell backwards. I lost the leash and fell backwards and hit my head on the pavement.”

Stunned at first, Bailey got up and tried to free her dog, while Davidson’s husband tried to pull his dog off. Bailey says “The pit bull had my dog by the throat and would not let it go. A neighbor jumped on top of the pit bull and pried open its jaws. And that’s what saved Webster.” 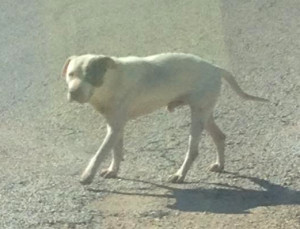