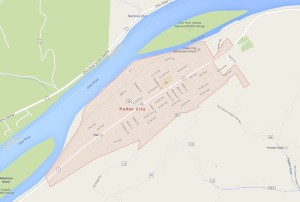 On April 1, at around 6 a.m., a Paden City woman became the second victim of a vicious dog attack within the last year.

Debbie McMahon and her small dog were walking near her home on Main Street when they were both attacked by a large pit bull dog. After screaming for help, McMahon’s son came out of their house and stabbed the dog several times to get it off of his mother. The dog, after being stabbed, was still able to run off before the Paden City Police Department arrived. Patrolman Mike Shreves arrived on the scene within minutes to help provide assistance to the victim. McMahon went to the Wetzel County Hospital on her own for treatment of her injuries.

After looking for the dog, it was later discovered it was at home on South First Ave., a few doors from where the attack took place. Police spoke to Cecil Allison, owner of the dog, who informed them the dog has had his shots. Allison was cited by the Paden City Police for allowing a dog to run at large. He will have a hearing in Paden City Court. Charges of harboring a vicious animal have also been filed in Wetzel County Magistrate Court and a hearing will be held in the matter before Magistrate Tom Shepherd.

Allison has been ordered by the Paden City Police Department to quarantined the dog in his basement for 10 days to make sure it is not rabid.

In another dog-related matter, Robert L. Greathouse, 38, of Margery Run Road, Middlebourne, made his initial appearance before Magistrate Mary Dotson on March 31 to answer to four separate misdemeanor offenses of failure to rabies vaccinate a dog, keeping vicious dogs, failure to pay head tax on dog, and failure to pay license fee for vicious dog. All the offenses are alleged to have occurred on Feb. 25.

It is alleged that Greathouse owned a pit bull that escaped from a fence on the end of his residence and attacked an individual, biting him on the leg and arm at 4615 Elk Fork Road. Greathouse allegedly did not have a license for the animal, nor did he have it properly secured to prevent it from causing injury to another person.