A third video has surfaced from New Jersey, showing a Vineland cop straddling a non-resisting man while punching him repeatedly, ordering a police dog to join in the attack, which resulted in the man’s death last week.

“Get him! get him,” the cop orders the dog, who then begins mauling Philip White.

After several seconds, the cop then tries to pull the dog off the White, but the dog continues his attack.

White, who is on his back, has his arms in the air as the dog continues to chomp on him.

“Roll over, put your hands behind your back, do it now!” the  cop orders as the dog refuses to let go of him. 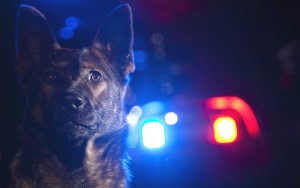 Policing in this country really seems to be going to the dogs. Yes, that’s a silly euphemism, at least unless you live in Vineland, New Jersey. A video filmed a week ago Tuesday appears to show local police allowing a K9 dog to tear into the face of what looks to be an unarmed black man while he is curled up on the ground. The man, identified as 32-year-old Phillip White, later died while in police custody.The police were responding to a report of a disorderly person, who was “screaming and yelling,” according to a local television station with access to the police radio transmissions of the incident. Multiple officers arrived on the scene and requested backup, yelling as they allege White reaches for one of their weapons. Moments later, one of them reports, “Slow units down. Subject under apprehension. Tried disarming me.”According to a statement from Cumberland County Prosecutor Jennifer Webb-McRae, “White was handcuffed and restrained… White was placed in an emergency vehicle to be transported to the hospital. At some point during transport White became unresponsive.”

On March 31, police in Vineland, N.J. approached 32-year-old Black man Philip White after responding to a call that morning about a disorderly person. Conflicting reports stated that White reached for an officer’s weapon, prompting one of the officers to straddle and beat White while an attack dog mauled the man’s face.

There is now video evidence that supports claims that the officers allowed the attack to go on despite White being down. White later died from his injuries while en route to a local hospital for treatment. Witnesses videotaped the incident with one clip showing an officer trying to confiscate one of the phones from a bystander.

The website Photography Is Not A Crime posted the clearest video yet, which shows the harrowing details of what happened that day. 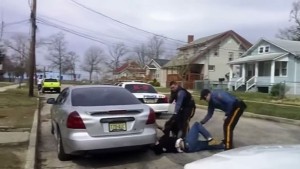 A pair of police officers in southern New Jersey are reportedly under investigation over an in-custody death after a video of the suspect being attacked by a K-9 dog while being subdued was posted online.

Phillip G. White, 32, of Vineland, died in an ambulance enroute to the hospital shortly after his arrest on March 31.

A video posted on YouTube shows that White was attacked by the K-9 while he was pinned to the ground. While the video does not show what preceded the incident, it has sparked outrage, with some claiming that excessive police brutality led to White’s death.

Both officers, identified as Louis Platania and Richard Janasiak, have been placed on administrative leave pending a mandatory investigation of the incident by the Cumberland County Prosecutors office and the New Jersey State Police.

“Come! Get ’em! Get ’em!” Platania is heard saying on the video, while he has White pinned to the ground. The dog then latches his jaws onto the suspect’s arm for several minutes until he is eventually pulled off.

The attorney representing Platania and Janasiak said that his clients operated within the means of standard police procedure and that White’s cause of death was likely due to the fact that he was on a combination of heavy drugs.

The German Shepherd Dog is a large canine, weighing between 75-90 pounds when full grown. The GSD’s coat needs brushing daily and will shed usually twice a year. Hereditary diseases to be aware of include elbow dysplasia, blood disorders, digestive problems, chronic eczema, keratitis (inflammation of the cornea), and skin allergies. Show lines can have hip dysplasia so serious that it  cripples the dog at a young age. The GSD has a life expectancy of approximately 13 years.