Family speaks out after son attacked by dog 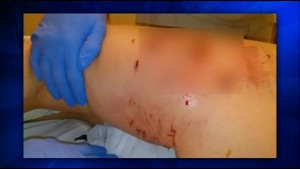 MIAMI (WSVN) — A South Florida family is speaking out a day after their 8-year-old son was attacked by an American bulldog while walking in his neighborhood with his mother.

Leon Montiel is recovering at Jackson Memorial Hospital a day after being attacked at 3820 N.W. 12th St. Miami Fire Rescue arrived and transported him in stable condition after being bitten in the arm and leg. “Had it been an 8-year-old thinner than this, it would’ve destroyed his muscle [and] bone basically,” said Montiel’s father, Oscar Montiel.

The dog recently bit another person several weeks ago, according to Carlos Cabrera, the dog owner’s grandson. “Like two weeks ago,” he said. “He’s pretty normal, he’s just not comfortable around people.”

Oscar said he has seen pictures of the man who had been previously attacked by the dog and said it was horrific. “The other gentleman that went through this a week ago? When I saw his face devoured, I could not imagine what would have happened if any of the bystanders and neighbors at that moment, rescued my wife from what it is that was happening,” he said. 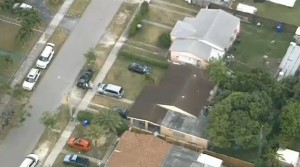 MIAMI – A dog left his home and rushed to attack a boy who was playing with a bouncing ball in Miami’s Flagami neighborhood Thursday, witnesses said.

The 8-year-old boy was with his mom at 3820 NW 12th St. The dog bit his arm and leg, City of Miami Fire Rescue Ignatius Carroll Jr. said. His mom wasn’t injured.

“The lady in the house came out to try and drag the dog away,” neighbor Maday Rosales said.

8-year-old boy attacked by dog while walking with mother 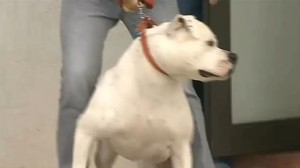 MIAMI (WSVN) — A South Florida boy was attacked by an American Bulldog while the two were walking in their neighborhood, Thursday.

Miami-Dade Animal Services responded to the scene. Garcia said the child and mother were playing on the sidewalk when the dog ran over. “They were on the sidewalk with his mom, messing around, laughing and stuff, and he was just bouncing his ball and then out of nowhere he [the Bulldog] just came rushing out and just jumped on him,” she recalled. “The mom pulled and also the owner grabbed him and just pulled him off, and then they just took him inside.”

Maday Rosales also witnessed the attack and wanted to step in. “As he walks out, we ran out, and we’re trying to find something to have the dog, stopped, and we couldn’t.”

The dog recently bit another person several weeks ago, according to a person related to the dog owner. 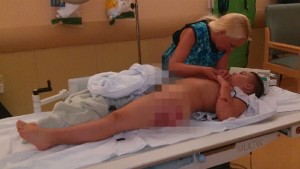 MIAMI (CBSMiami) — Rescue crews rushed an 8-year old, mauled by a dog, to a South Florida hospital on Thursday.

An American Bulldog named Rudy somehow got out of the house and went after a little boy walking by with his mom.

Surveillance video from a neighbor showed a mother and son walking then suddenly, right in the middle of the screen, you can see the dog.

The video shows the 8-year old victim bouncing a ball before the attack, witnesses tell us it seemed like the dog was going after the ball.

“We just see this big dog  throw himself on top of the kid, bring the kid down, just start hassling him, bit him and all this stuff,” said witness Rebecca Garcia.

The dog left deep gashes on the boy’s thighs and arm. His father, Oscar Montiel told Local 10 News that the dog wouldn’t let go, even when the owner tried pulling it off of Leon.

Montiel said this has been a trying time for the entire family. 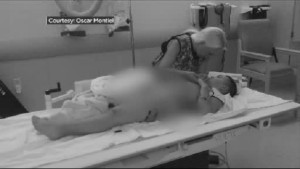 MIAMI (CBSMiami) – A young boy is recovering after being attacked by a dog while he was walking down the street with his mother Thursday.

The boy’s father, Oscar Montiel, spoke exclusively with CBS4’s Gaby Fleischman. He said his son suffered several severe bites to his leg and arm. He also said that he got several stitches and is on antibiotics so that the wounds don’t get infected.

He said while he’s expected to be okay physically, his son and wife are traumatized by Thursday’s incident. 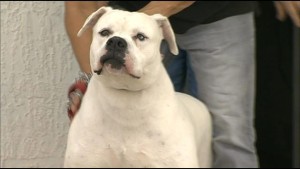 WHY DO WE CALL THEM ‘PIT BULL TYPE DOGS’? 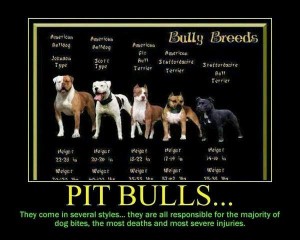