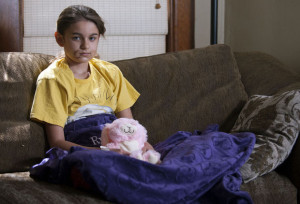 A dog tore open an 11-year-old girl’s face Saturday, doing enough damage that she needed hours of surgery and more than 100 stitches.

Amanda Brick said she had dropped her daughter and Rylie off about 3 to play at her ex-husband’s house. He called her no more than an hour later to say his dog had bitten Rylie, she said.

Brick said Lee Cummings told her they were all hanging out when Blue suddenly bit Rylie, slicing her face from the corner of her mouth down to her chin.