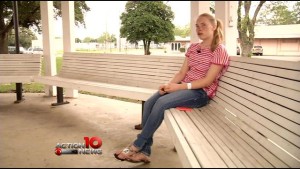 A Woodsboro teenager is recovering from surgery after she was attacked by a dog.

Sunday afternoon, Alyssa Holst, 14, was visiting a friend in Refugio when the friend’s Rottweiler jumped up and bit Alyssa’s face.

“He only took one grasp at me,” Alyssa said. But the single bite left significant injuries to the girl’s face. Her nose is cut up and her lips are swollen and stitched up. The quiet seventh grader said the attack happened so suddenly she hardly had time to react.

“When the dog bit me I really didn’t even cry,” she said. “I was in pain but I was just bleeding a lot and just scared that I was losing a lot of blood.” 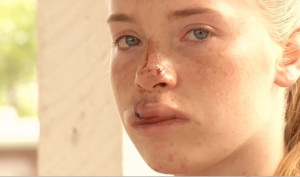 Alyssa was brought to Driscoll Children’s Hospital where she underwent surgery.

Even though doctors say the wounds will heal, the 14-year old is understandably upset.

“It makes me look totally different,” she said. “Scared, that what if this doesn’t really come true, what if I look like this for the rest of my life, I really don’t know, I’m like scared.”

As for the dog, Alyssa says it’s been taken under a ten day quarantine. Surprisingly, the injured teen expressed concern for the dog that attacked her.

“My friend loves that dog so much and I really don’t want them to take it, but they said they might have to.”