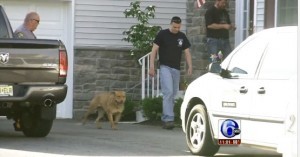 The incident happened around 5:00 p.m. Wednesday along the unit block of Concetta Court in West Tuckerton, NJ.

The 2-month-old girl was outside with her mother and the family’s pitbull terrier.

The child’s mother went back into the house to refill a bottle.

Officials say the dog then picked the girl up in its mouth and carried her into the house.

In the process, the 2-month-old suffered a puncture wound to the chest.

By Dan Alexander May 21, 2015 6:22 AM
A 2-month-old girl was flown to Cooper University Hospital in Camden after a Little Egg Harbor family’s pit bull, described as well behaved and friendly, inadvertently punctured the infant’s chest when he lifted her up and carried her into the house according to 6 ABC.
Click here to read more

Why do we call them ‘pit bull type’ dogs?

An open letter to Tia Torres – By Jennifer Kim

A message to Tia Torres – by Roxanne Hartrich

The APBT is of medium intelligence, and it is athletic. They have plenty of energy and exuberance for life. They are

affectionate companions are often referred to as a “nanny dog”, which leads many families to believe that they are suitable companions for children. Many can live happily with children and never have an issue, but there are many cases of the family pit bull suddenly attacking or killing a child in the household. The Pit Bull advocacy group BADRAP recently retracted their original “nanny dog” statements (https://www.facebook.com/BADRAP.org/posts/10151460774472399)13.In 2013 and 2014, in the United States, 27 children were killed by Pit Bulls and their mixes. Most of these children were killed by family pet pit bulls that had never been neglected or abused and had always loved the child. As with all breeds, the traits needed for their original tasks remain in the dogs – in this case, the sudden explosive aggression that was necessary to survive in the fighting pit. An APBT may never show this aggression, but if it does there will be no warning and the attack will not be easy to stop. Extreme caution should always be taken when this breed interacts with children. They are fun loving dogs that have “clownish” behaviors. Despite, their many positive qualities, this breed may not be suitable for everyone. Their high energy requires a family that can accommodate and appreciate this aspect of their personality. They usually do best with active families. Many American Pit Bull Terriers get calmer as they age and an older dog may work for a more reserved family.