Dog may have bit, killed baby in Youngstown 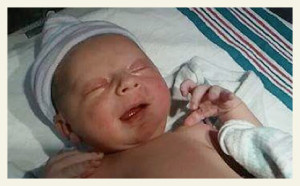 YOUNGSTOWN, Ohio (WKBN) – Kristy Grim said she brought her newborn son Aiden home for the first time Saturday evening and had been sleeping on her couch to be close to him when she believes her son was bitten on the head by one of her dogs.

The baby was lying in a small laundry basket that was being used as a make-shift crib.

“The baby was here in the basket, and I woke up, and it was horrifying,” Grim said. “He was… His head was just covered in blood.”

Grim lives in a house on Valorie Drive on the south side of Youngstown with her mother, brother and five dogs. By the time police and paramedics arrived, the baby — just three days old — was dead.

“It was just unfortunate. It was a very unfortunate incident, and it was tough for everybody to see,” said Youngstown Police Lt. Doug Bobovnyik.

Youngstown Police are investigating Aiden’s death, as is the Mahoning County Coroner’s Office. Police said they have to wait for a coroner’s report before they can officially declare the baby’s cause of death and decide whether to file charges. As of Monday, Grim has not been charged.

Grim says she is now being blamed and threatened on social media for her son’s death.

“Everybody’s trying to get me arrested for what’s happened,” she said. “I never neglected my child. I took care of him. I held him all the time and everything.”

The Grims say the dog that bit Aiden was a mixed breed and wasn’t vicious. The Mahoning County Dog Warden took the dog into custody, where it will stay for at least 10 days.

Dog may have bit, killed baby in Youngstown 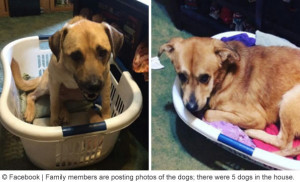 YOUNGSTOWN, Ohio – Youngstown detectives and the coroners office are investigating the death of a 3-day-old infant. The child’s mother says the baby was bitten by a family dog.

It happened at a home on Valerie Street. The baby boy, named Aiden, was spending his first day at home. His mother Kristy Grim says they were both sleeping in the living room. The baby was on a blanket in a plastic laundry basket.

“I was laying here next to him; he was on the floor in his bed. I woke up and he was screaming and he was covered in blood,” Grim said.

She says they called 911 and requested an ambulance.

“While we were waiting for the ambulance we were trying to clean him up and stop the bleeding,” said Grim.

The 21-year old mother says she saw bite marks on the child’s head and she knew the dog had bitten the baby. Grim says the dog was never a violent dog and was actually protective of  the infant.

“He was never aggressive before; he never did anything like that. We don’t think he meant to do it but we don’t really know,” Grim said.

The grandmother was also in the house and says the infant was breathing and responsive when she picked him up.

“He was breathing; we keep checking him because he thought he quit breathing but he would take a breath,” Patricia Grim said.

When the ambulance crew arrived they said the child was dead. The dog, described as mix-breed shepherd weighing around 50 pounds is in being held in isolation at the county dog pound. It’s fate is not known. Police say detectives are awaiting a ruling on the child’s death by the county coroner.

Police: No charges in death of infant bitten by dog

YOUNGSTOWN, Ohio – Youngstown police say no charges will be filed in connection with the investigation into the death of three-day-old boy who died after he was bitten by a family dog.

Police made the decision after learning that the Mahoning County Coroner intends to rule the death as accidental.

Dr. Ohr says he wants to make it clear that this was not a mauling or an attack. He says there isn’t any evidence that the child was even shaken by the dog.

The investigation found several puncture wounds on the infant’s head that pierced the skull, and causing the child’s death.

Dr. Ohr says the dog is a male Labrador and Shepard mix that has never attacked anyone and has no history of aggression.

The brother of the infant’s mom is the owner of the dog and would like to have it returned.  The dog is under mandatory quarantine at the Mahoning County Dog Pound.

Attempting to put the incident into prespective, Dr. Ohr pointed out that there are approximately 4.5 million dog bites each year in the United States. Of that number, Dr. Ohr says that approximately 800,000 require emergency medical attention. He says that between 20 and 30 deaths are reported each year due to dog bites.

The mother of the infant, 21 year old Kristy Grim told Youngstown police officers that threats have been called in to her home on the 3500 block of Valerie Drive from people since news broke about the death of her son.

Around 2:30 p.m. on Monday, Kristy Grim told officers that she received a voice mail from a phone number that was hard to understand. She called the number and the person on the phone threatened to end her life.

Grim believes the voice on the phone was of a former friend who blamed her for the death of her child.

By Glenn Stevens, Reporter
YOUNGSTOWN, Ohio – The Mahoning county coroner has ruled the death of a three-day old Youngstown infant that was bitten by a family dog was an accident.

The medical examiner confirmed that the child’s death was a result of the dog bite, but also says those who have made threats against the young mother should be embarrassed.The news that no charges should be filed in connection with the death of her infant son Aiden, is a great relief for 21-year old Kristy Grim.

“I hope that things at least get better now and people stop sending threats and everything to me,” said Grim.
The infant was sleeping in a basket next to the mother early Sunday morning when for some unknown reason the dog picked up the child up by the head.

“At three days old the child’s skull is very fragile and the dogs jaw was able to penetrate the skull, causing injuries to the brain and ultimately the death,” said Dr. Joseph Ohr, a forensic pathologist with the coroners office.

The examiner says it was not an attack or a mauling but a tragic accident.  Dr. Ohr says there is no reason for all of the hateful threats against the mother on social media.

“It’s easy to say well you should have, you could have, you would have. What I would say to those people is that is shameful and embarrassing,” Ohr said.

The dog is owned by Grim’s brother, who says the dog, named Toby, was never aggressive and if anything is over-friendly.
“He loves people, he always loves getting attention from people, always wants people to pet him, he’s just a happy dog,” his owner said.

The dog will remain in a mandatory ten day quarantine. The Dog Warden says the dog has displayed no aggression and it’s possible return remains uncertain and still under discussion.

Youngstown detectives say that after presenting the facts in the case and the coroners report to the prosecutor a decision was made that no charges should be filed.

In an earlier report by WFMJ today, the report stated, “the brother of the infant’s mom is the owner of the dog and would like to have it returned.” This was excluded in the afternoon update and restated as, the dog’s “possible return remains uncertain and still under discussion.” The fact that the brother wants the animal back compounds this tragedy much further. It also speaks volumes about the dysfunctional nature and people within that household. May Baby Aiden rest in peace.

Before Grim deactivated her Facebook page, several comments were captured. In one comment, she states the dog belonged to her brother. “Yes, he bit the baby, my brother’s dog. And now they’re putting it to sleep,” Grim wrote. In another, Grim states the dog is not a pit bull. “I know people who have pit bulls around their newborns at least the dog wasn’t a pit bull,” she wrote. Grim also said that she was waiting on a crib. “I had everything for him besides a crib because a few months ago I was told I would receive a free crib so I did not bother buying one,” Grim wrote.

Also, as usual, some people are attacking the young mother on Baby Aiden’s GoFundMe page, blaming Grim for the baby’s death. Another is calling her a “pos mother” because she had not yet gotten a car seat for the newborn. There is also focus on the makeshift crib the baby was laying in. It is being described as a small basket or laundry basket — it is unknown which is true. Police must wait until the coroner determines the cause of death before deciding if charges are warranted.

Supervision is always required when children are in the company of dogs. Infants should never be left alone with a dog, even if they are sleeping in a bassinet or crib. If the infant is in their bedroom, the door should remain shut. If the infant is in another room without a door, an adult should be in the room at all times. Small children should also be constantly supervised. Children should not be out of eye sight of the attending adult. If the adult must leave the room they should bring the child with them or kennel or contain the dog in another room. Extra caution should be taken with large dogs or breeds of dogs that are known to be highly dangerous to children. These dogs may require a parent to always be in arm reach of the child.