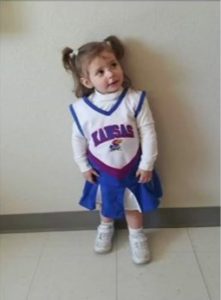 located on the 800 block of SE Carnahan after a 911 call that 2 year-old Piper Dunbar was reported missing.

“We looked everywhere, I screamed her name so loud,” said Piper’s father, Donnie Dunbar. “Can’t believe that quick the most precious thing on earth can be taken away from you.”

Police began searching the area and found Piper dead in her front yard underneath a tarp. Dunbar says he and Piper fell asleep earlier that evening and he told 13 NEWS he was unaware of what was happening.

“She figured out had to open a child safety lock with her fingers,” said Dunbar. “She could turn the knob and open a dead bolt that’s on the back door, she was so smart.”

Throughout the course of their investigation, police say they obtained enough information to believe Piper had been the victim of an animal attack. Animal control responded to the scene and seized two pit bulls that Dunbar says belonged to Margaret Jaramillo, a family friend who had been staying with Dunbar to help take care of Piper since he is a single father. Jaramillo says she was running errands during the attack and made the 911 call as soon as she realized Piper was gone.

Family reacts to daughter being killed by two pit bulls 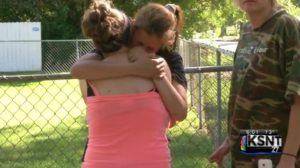 “And I would give anything and everything I’ve got to tell her I love her one more time,” Piper’s father, Donnie Dunbar said.

Saturday night, Dunbar, said he and his daughter were sleeping on the couch. He says he woke up and saw his daughter gone from inside his house and called 911.

Police showed up and found piper dead in the corner of the front yard. Donnie says he thinks Piper made her way outside the home while he was sleeping. Dunbar says a family friend was staying at the house and brought along two pit bulls. He says he thinks both pit bulls came from the backyard and attacked his daughter.

“You can never be running too late just to take one more step just to make sure that little baby’s safe. You can make a difference like that.”

TOPEKA,  Kansas––Piper Dunbar,  age 2,  of Topeka,  Kansas,  was on September 24,  2016 killed by pit bulls in her own front yard,  the latest victim of an ongoing drive by pit bull activists to repeal the breed-specific legislation which had long prevented fatal and disfiguring dog attacks in many Kansas communities.

Falling asleep earlier in the evening with the victim,  her father Donnie Dunbar awakened at about 8:00 p.m.,  he told Daniela Leon of WIBW News,  to discover her missing.

Throughout the course of their investigation, police say they obtained enough information to believe Piper had been the victim of an animal attack. Animal control responded to the scene and seized two pit bulls that Dunbar says belonged to Margaret Jaramillo, a family friend who

had been staying with Dunbar to help take care of Piper since he is a single father. Jaramillo said she was running errands during the attack and made the 911 call as soon as she realized Piper was gone.

“I saw her from the distance. They wouldn’t let us close to see her, from what I understand, they think her injuries were caused by the dogs,” said Jaramillo.

Jaramillo said the two dogs were in the backyard and doesn’t know how they made their way to the front where Piper was. Police are continuing to investigate the case, but both Jaramillo and Dunbar are torn by the loss of Piper.

“She just loved attention and loved to be hugged,” said Jaramillo.

Dunbar and Jaramillo were taken to police headquarters and interviewed by Topeka police.

In 2010, to the delight of pit bull owners and breeders, the City of Topeka repealed their longstanding pit bull ban. The ban had been in place since the early 1980s, when pit bulls first began to capture national headlines for horrific maulings and fatalities across the country. Now Topeka is just like any other unregulated part of the country. However, the tri-state region of Kansas, Iowa and Missouri still maintains the highest level of breed-specific laws in the country.

Margaret Jaramillo goes by multiple names on Facebook, including Margaret Johnson. From 2013 to 2014 she and her partner, James Johnson, are seen with three different pit bulls. 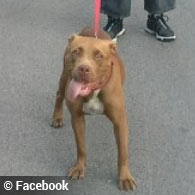 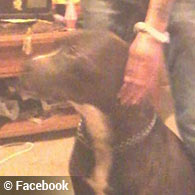 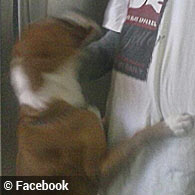