BANGOR, Maine — A Bangor boy has been identified as the victim of a deadly dog attack involving a pit bull Saturday in Corinna, according to Sheriff Troy Morton. 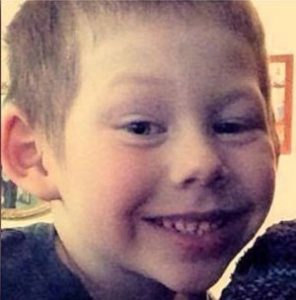 Hunter Bragg, 7, was killed at the home of Gary Merchant Jr., 45, on Moody Mills Road after he was attacked by the adult male dog while playing outside, the sheriff said.

“Hunter was playing in the yard with two other children when the attack occurred,” Morton said. “Hunter’s father, Jason Bragg, 35, was at the residence at the time of the attack.”

Deputies responded at about 5:15 p.m. Saturday to a reported dog attack and found the 7-year-old boy deceased.

Merchant had the dog euthanized after the deadly incident, Morton said.

No charges have been filed and no other injuries were reported, the sheriff said.

“Hunter was loved by so many people,” Jennifer Mcclure, the boy’s aunt, said in a GoFundMe post set up to pay for funeral expenses. “He always had a huge smile on his face and brought joy to [people] everywhere he went. He had a bubbly personality and was always a riot. He has so many people that are devastated that he is gone and so many people that loved him dearly.”

Report: Father tried to save son after dog attack

CORINNA, Maine — After an adult male pit bull attacked a visiting 7-year-old Bangor boy in early June, the father of the injured child tried unsuccessfully to save his son’s life, according to the medical examiner’s report released Wednesday.

The pit bull, named Koda, attacked Hunter Bragg of Bangor on June 4 while the boy played outside with two other children at the home of

Gary Merchant Jr. at 207 Moody’s Mills Road. His father, Jason Bragg, was staying in a camper at the residence and the child was visiting, the report states. Hunter Bragg lived with his grandmother in Bangor, the Corinna animal control officer’s report states.

“The cause of death for Hunter Bragg is: Blunt and sharp force injuries of [his] head and neck,” Mark Belserene, spokesman for the medical examiner’s office, said in a Wednesday email.

“According to the father, they were all outside when the pit bull attacked, biting [the boy’s] throat and face,” the autopsy report states. “The father carried Hunter inside, called 911 and started CPR. When Sgt. Whitehouse arrived, CPR was still in progress.”

The multicolored, 1½-year-old pit bull that killed Bragg had a history of violence, according to Charles Gould, the local animal control officer. Gould wrote in his report that it did not appear that the animal was provoked.

The dog formerly lived in Vermont with a relative of Merchant and was registered there until the end of 2015. The dog was brought to Maine in early 2016, after it attacked one of the relative’s other pets, Gould’s report states.

Morton said shortly after the fatal mauling that the dog’s history is a major part of the investigation.

The pit bull was euthanized at Merchant’s request after Bragg’s death, the sheriff said.

The U.S. saw 34 dog bite-related fatalities in 2015, and pit bulls contributed to 28, which is 82 percent of the total, according to Dogsbite.org. The term “pit bull” refers to three breeds: the American pit bull terrier, American Staffordshire terrier and Staffordshire bull terrier.

Boy killed in dog attack was ‘loved by so many’

The dog has been euthanized, authorities said they are investigating and have yet to decide whether criminal charges will be filed.

At the home where the boy was killed, a man briefly stepped outside at about 11:15 a.m. Monday and asked reporters to give the family and their neighbors space. 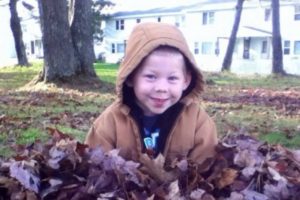 “We’re all dealing with this as we have to,” said the man, who declined to give his name. “It’s family. We’re all grieving.”

Family of Hunter Bragg on Monday set up a GoFundMe page to help pay for the boy’s funeral expenses.

“Hunter was loved by so many people. He always had a huge smile on his face and brought joy to everywhere he went. He had a bubbly personality and was always a riot,” Jennifer McClure, one of the boy’s aunts, writes on the GoFundMe page. “He has so many people that are devastated that he is gone and so many people that loved him dearly. He was his Aunt Jenny’s ‘Cutie Patootie,’ his Nana’s ‘Little man’ and always nana’s boy, he was everyone’s buddy.

“He was taken from everyone at such a young age, but we all know that his mom is now with him and looking after him up in Heaven.”

The boy’s mother, Jessica Rose McClure, died in January 2012 at the age of 27. Her obituary in the Bangor Daily News said she had three children, Mackenzie, Justin and Hunter. No cause of death was given.

The medical examiner’s report details a horrific mauling in the June 4 pit bull attack, and efforts by his father to save the boy’s life.

Hunter Bragg was a healthy 7-year-old boy who died of “blunt and sharp force injuries of head and neck” that were the results of a dog attack, according to a newly released medical examiner’s report on the boy who was killed in June by a pit bull in Corinna. 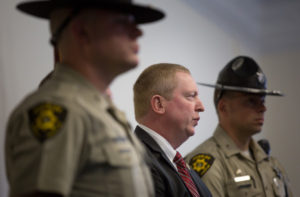 BANGOR, MAINE — 06/06/2016 — Sheriff Troy Morton (center) identifies the victim of a fatal dog attack on Saturday in Corinna as Hunter Bragg, 7, during a press conference on Monday in Bangor. Micky Bedell | BDN

The town animal control officer’s report on the June 4 attack, released several days after it happened, said the male pit bull attacked Hunter’s throat, but the report didn’t specify the extent of the injuries.

The medical examiner’s report, however, dated June 6, details a brutal mauling, with injuries to the head, face and neck, including a perforated larynx and trachea, sharp- force injuries to the esophagus, hemorrhages in the neck and mouth, and “multiple” wounds to the scalp, face, left shoulder and armpit. It says the attack was reported on 911 at 5:13 p.m. and Hunter was pronounced dead at 5:33 p.m.

The state Medical Examiner’s Office mailed the report to the Morning Sentinel after a public records request and it was received Wednesday.

The report also provides a brief and tragic narrative not earlier detailed by law enforcement:

Hunter’s father, Jason Bragg, 35, who lived in a camper on the 207 Moody’s Mill Road property, carried his son inside after the attack, called 911 and started CPR. When Sgt. Andrew Whitehouse of the Penobscot County Sheriff’s Office arrived, Bragg was still attempting to revive his son.

The boy had been playing with two other children in the yard at the time of the attack.

this case, there is also a strong possibility that the litter that produced Koda in October 2014 also bore two pit bulls that were legally declared vicious before the age of 1. Genetics is real and it matters.

In the chronology, we call to attention the widespread false and dangerous belief that dog aggression never translates into human aggression. Koda did not only have aggression toward male dogs when smelling a female in heat (the classic reason to neuter male dogs). Koda had breed-specific aggression, which is why Bandit was killed. Interdog aggression, generally, means aggression toward dogs, not killing another dog, which pit bulls were purpose-bred to do.

The American Pit Bull Terrier is, like all the ‘bully’ breeds, one of this group of descendants of the British ‘bull and terrier’ type fighting

bulldogs. Once imported into the United States, it was bred up to be bigger again, and again used in baiting animals and in dogfighting. The American Kennel Club (founded 1884) was unwilling to register these fighting dogs, so in 1898 the United Kennel Club was founded specifically to register working pit-fighting dogs and to promote dogfighting. In order to be registered, a dog had to first win three pit fights7,8,9. The American Pit Bull Terrier (APBT) became a ‘breed’. As dogfighting declined in popularity in the 1930s and 1940s, Colby (the most famous and prolific breeder of these dogs) began to search for a new market and began promoting the APBT as family pets10,11. This despite the fact that his breeding lines included child killers12.