A homeless man was mauled to death by two dogs in Kalihi. 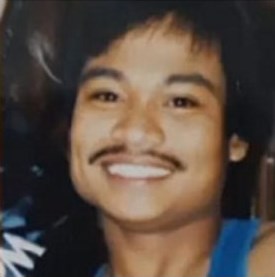 Aliado’s body was found at around 7 p.m. Friday, July 29, on a stream bank near Marukai, along Kamehameha Highway.

Two dogs were found at the scene. The Hawaiian Humane Society says they are currently in its custody, as requested by the Honolulu Police Department.

But what triggered the attack?

The investigation is currently classified as an “unattended death” as police try to piece together what happened.

Witnesses say it happened behind Containerland, a party supply warehouse.

“There was a dead body. A guy was mauled. It looked like his leg and his head was all bloody,” said a witness.

Aliado’s friend, Norbert Cardoza, picked up the clothes he says Aliado was washing in the stream at the time of the attack.

“He was the most mild-mannered person you could meet. Didn’t bother nobody. Just that he was homeless,” said Cardoza.

The owners of Containerland did not want to go on camera, but confirmed the two dogs under the Humane Society’s care belong to them.

They say the family pets somehow got outside of the fenced warehouse, and that the dogs — pit bull mixes — are typically “well-mannered.”

A wooden cross sits on the Kalihi Stream bank where Crisencio Aliado died.

He was last seen collecting cans here just before 6:30 p.m. on July 29. Twenty minutes later, a passerby discovered his mangled body. Two dogs with blood-stained faces were found nearby. 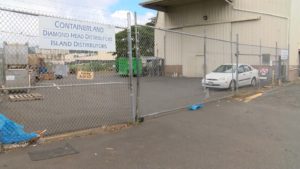 Those dogs were returned to their owners after the mauling death, in a situation that community members say is concerning.

“The dogs are back in the community. We don’t know exactly where they are,” said City Councilman Joey Manahan, who represents the area.

The dogs, both pit bull mixes, belong to the owners of Containerland. Investigators say the dogs got loose through a hole in the fence.

“Just imagine being bitten to death. This was horrible,” said attorney Richard Turbin. “These people who kept these dogs certainly didn’t intend it, but in this situation the owners were incredibly negligent because there was a hole in the fence.”

A 13-page autopsy report says Aliado was covered in deep gashes and puncture wounds. Skin on his head, arms and legs had been ripped off, and there were tears on his skeletal muscles.

The report also says the dogs attacked two other people in 2013 after coming out of an opened gate in the same area.

The Hawaiian Humane Society released two dogs today to their owners after the dogs allegedly mauled a homeless man to death in Kalihi.

The Honolulu Medical Examiner’s Office identified the victim as 52-year-old Crisencio Aliado and said he was homeless. Aliado died on July 29 of multiple dog bite wounds, the office said. His manner of death was pending further investigation.

Dogs Returned to Owners
UPDATE 08/12/16: It was announced this week that Honolulu authorities released the two pit bull-mixes that killed a homeless man back to their owners. On July 29, the two pit bulls escaped the fencing from the dog owners’ business, ContainerLand, and fatally attacked 52-year 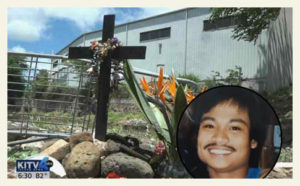 old Crisencio Aliado who was washing his clothes in a nearby stream. Police are apparently waiting on a formal report from the medical examiner’s office before taking any further action.

“Normal” dog owners would have relinquished the dogs to authorities to be euthanized after a fatal attack. An antisocial dog owner would not. 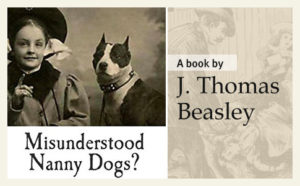 “John Paul Scott and John L. Fuller carried out a series of selective breeding experiments at the Jackson Laboratories in Bar Harbor, Maine. By happy chance, their results revealed a simple rule that seems to work. Their general conclusion was that a mixed breed dog is most likely to act like the breed that it most looks like.