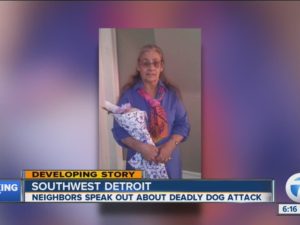 Detroit police say a 71-year-old woman was mauled to death by four pit bulls on Saturday night in Detroit.
According to police, it happened on Ferdinand St. in southwest Detroit.
Police say the dogs belonged to the family. The woman’s relatives arrived home and found Elizabeth Rivera dead, according to police.
Read more: http://www.wxyz.com/news/region/detroit/71-year-old-woman-mauled-to-death-by-pit-bulls 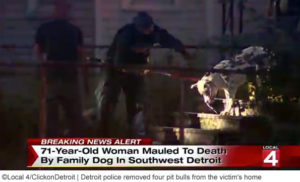 One of the four dogs in the home, described in the Detroit police report as pit bulls or pit bull-mixes, crushed the neck of owner Elizabeth Rivera, who was found dead inside her southwest Detroit home by a relative Saturday night.

The death was ruled accidental by the Wayne County Medical Examiner’s office following an autopsy. Rivera died of a “crush injury to the neck.”

“I don’t know if all of the dogs were involved in the attack or just one,” Detroit Police Officer Jennifer Moreno said Monday.

Grandma Gets Eaten By Her Own Pet

A Detroit woman was attacked and mauled to death by her own pit bull in front of her house on July 16. 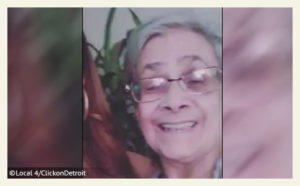 According to Detroit Police Sgt. Michael Woody, Rivera’s pit bull bit her in the neck, severed her jugular vein, and mauled her on the ground. Rivera’s granddaughter discovered her body, WDIV reports.

“We have no idea and even family members are baffled,” said Captain John Serda of why the dog attacked, reports WDIV. “I feel so bad for the family members to have dogs that belong to your family do something like this is beyond comprehension.”

The case bears a resemblance to a case in Shaker Heights, Ohio in 2015.  In that case, 71-year-old Annie Williams was mauled to death by a pit bull when she went to visit family members.

A 71-year-old southwest Detroit woman was attacked and killed by her own pit bull dog Saturday night, police said.

Authorities said Elizabeth Rivera died in the attack. She died of a crush injury to the neck, said Lloyd Jackson, a spokesman for the Wayne County Medical Examiner’s Office. He said that the manner of death was accident. An autopsy was performed today.

The incident happened about 8 p.m. at her home in the 2000 block of Ferdinand, near Vernor Highway, according to Sgt. Michael Woody of Detroit Police.

Woody said the dog, one of four in the home, bit the woman, knocking her down, and then bit her throat, severing her jugular vein. She died at the scene. 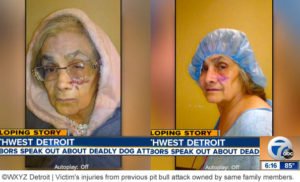 The manner of death was ruled an accident. The autopsy was performed on July 17, reports the Detroit Free Press. The following day, Detroit police stated they had completed their investigation, though it was unknown if one or more family pit bulls were involved in the fatal attack. Rivera was found dead inside her home by a relative Saturday night.

WXYZ Detroit reported new details in a news video Monday, along with photographs of Rivera’s injuries involving a previous attack by a different pit bull. That attack was first reported as occurring last August. However, the WXYZ video states that it was several years ago, and Rivera had to undergo extensive surgeries and skin grafts after that family pit bull attacked her face. It was later put down. The loved one who spoke to WXYZ would not appear on camera in fear of retaliation.