Leesburg police identify woman mauled to death by her dog 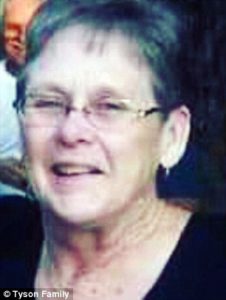 Leesburg police today identified the woman they believed was mauled by her own dog Thursday night as Sonda Tyson, a 66-year-old grandmother.

Tyson was found by her granddaughter and daughter-in-law lying in a pool of blood on the back porch of her Leesburg residence, a police death report states. Her arms had “significant damage” and were missing flesh.

Her daughter-in-law, Amber Fletcher, called 911 and told dispatchers she was still breathing. Loud barking is heard in the background of the call.

“She’s bleeding everywhere, I don’t know. Her bones are showing…” Fletcher told dispatchers. “You can actually see the bones in her arms. Oh my god…She has a bigger dog, so I don’t know if her dog bit her.”

When first-responders arrived, a large, mixed-breed dog was trying to push its way out to the back porch and appeared “vicious,” records show. The dog’s coat was stained with blood around its head and neck, and paramedics retreated from the porch.

From the top of a fire truck, a police officer fired one shot from his rifle, striking the dog. A few minutes later, officials heard it moving around in the home, and another shot was fired, killing the dog, the report states. Health Department officials will be performing a necropsy, which could show if the dog was diseased, police said.

Fletcher told authorities she had left the residence earlier in the day to pick her daughter up from school. When they arrived back at the Leesburg home, the 13-year-old went running to see her grandmother on the back porch and began screaming when saw her badly injured on the ground, records show.

Florida woman attacked and killed by her own dog 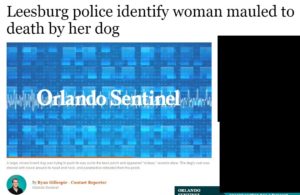 (WESH/CNN) — Police believe a Central Florida woman was attacked and killed by her own dog.

“She’s bleeding everywhere, I don’t know. She fell over, looks like she fell over a chair.”

That’s Sonda Tyson’s daughter-in-law calling 911. At first, she doesn’t realize Tyson has been attacked by her own dog.

After the 911 dispatcher asks her if it appears that Tyson fell, the daughter-in-law says “Um, I don’t know. She has a bigger dog, so I don’t know if like her dog bit her, or I, I don’t know.”

According to the police report, a “large brindle pit bull mix dog” was in the home when rescue teams arrived.

Leesburg police said that when paramedics tried to work on the victim on the back porch of the home, the dog was still nearby and acting viciously and was covered with blood.

And so police were called in to euthanize it. “There was absolutely a public safety concern to any and all that were on that scene,” said Lt. Joe Iozzi.

The police report went on to say that the “dog would not let EMS personnel approach the victim” and they noticed it had “blood on his coat, especially around his head and neck.”

A search team was sent into the home and the dog was found and fatally shot, but it was too late to save Tyson.

Animal services is examining the dog, which the woman owned since it was a puppy, to see if it had some illness that may have triggered the attack.

Animal control records show the dog had been responsible for prior attacks — in 2008, the dog attacked a woman riding a bike, and in 2012, the dog bit a child on the face.

Florida woman attacked and killed by her own dog

‘She’s bleeding everywhere. Her bones are showing’: Stomach-turning 911 call of woman who found her mother-in-law, 66, mauled to death by her pit bull mix 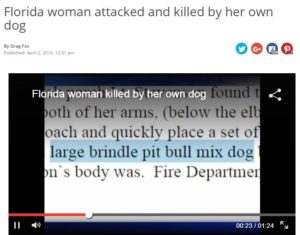 A 66-year-old woman was mauled to death by the pitbull-mix dog she raised since it was a puppy last week, baffling her family and authorities.

Sonda Tyson was found bleeding out on the back porch of her home in Leesburg, Florida, Thursday night by her daughter-in-law and 13-year-old granddaughter.

Daughter-in-law Amber Fletcher left the home that afternoon to pick up her daughter from school.

When they returned, the granddaughter ran to see her grandmother, but found her lying in a pool of blood outside the back door of the home and she began screaming.

In audio from Fletcher’s call to police, the dog is heard barking in the background as Fletcher describes the gory scene to dispatchers.

‘She’s bleeding everywhere, I don’t know. Her bones are showing…’ Fletcher told dispatchers. ‘You can actually see the bones in her arms. Oh my god…She has a bigger dog, so I don’t know if her dog bit her.’ 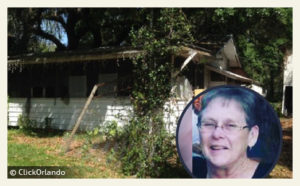 To our readers who are grandparents or senior citizens, please do not ever accept a recognized dangerous breed from one of your children who makes a similar claim, “for protection.” You see how it worked in this case? There have been other cases like this too, including senior citizens killed by their own “trained” attack dog. Tyson already had three dogs in her household, each capable of barking and scaring away potential intruders who already dislike homes with dogs.

This 66-year old woman suffered a horrific death at the jaws of a 100 pound pit bull-bullmastiff mix. This is an animal that Tyson never could have controlled. She never could have stopped it from attacking a postal carrier or a person walking down the street or from a child or friend visiting her home. She obviously could not stop the dog from attacking herself either. There was absolutely no reason for Tyson to ever have a dangerous animal like this and she paid the highest price of all. 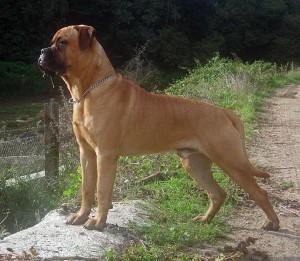 Learn more about the Bullmastiff

Why Do We Call Them Pit Bull Type Dogs?