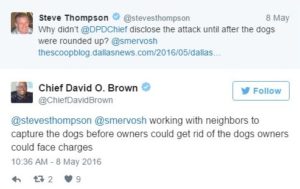 Dallas Police Chief David Brown took to Twitter on Sunday to explain why his department waited nearly a week to disclose that a woman had been mauled by a pack of dogs in southern Dallas, a gruesome result of the city’s ongoing loose dog problem.

The announcement came five days after the attack and four days after The News first inquired about a possible dog pack attack.

On Monday, the woman’s family said she would be taken off life support, KTVT-TV (Channel 11) reported.

Brown offered an explanation after The Dallas Morning News reported the woman’s story Saturday, the same day the Police Department posted the incident to its online blog.

Brown said police waited to announce the mauling until authorities seized six dogs Friday. He said he did not want the dogs’ owners to scramble to get rid of evidence because they could face charges, though he would not say what those charges might be. 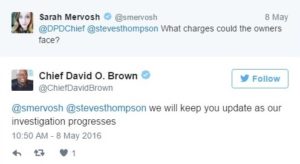 The previous day, Dallas Mayor Mike Rawlings voiced his displeasure that the city’s loose dog problem had been allowed to get so out of hand and insisted on more coordination between police and Dallas Animal Services.

“It’s just unacceptable for aggressive dogs to be threatening the lives of anybody in this city,” Rawlings said. “I am not only sad, but very unhappy.”

Public officials weighed in as 52-year-old Antoinette Brown lay bandaged in a hospital bed. Her family said she had been bitten more than 100 times and may not survive.
Read more: http://www.dallasnews.com/news/news/2016/05/08/owners-of-dogs-that-mauled-dallas-woman-could-face-criminal-charges-police-chief-says 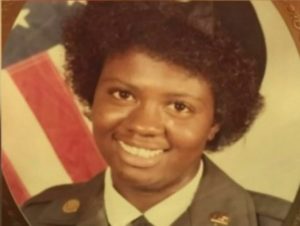 A pack of savage dogs mauled a woman in South Dallas this week, biting her more than 100 times and injuring her so badly that she may not survive.

On Saturday, that woman lay in a hospital bed, bandaged and unconscious, while the mayor of Dallas drove around the neighborhood where she was attacked to see for himself how the city’s loose-dog problem had snowballed into a loose-dog “crisis.”

“It’s just unacceptable for aggressive dogs to be threatening the lives of anybody in this city,” Mayor Mike Rawlings said Saturday. “I am not only sad, but very unhappy.”

She said her daughter remains hospitalized at Baylor University Medical Center at Dallas. It’s unclear if she will survive.

Antoinette Brown is in a medically induced coma. Bandages cover the places where the dogs peeled off her skin, exposing muscle and tendons. A doctor told her family that he stopped counting at 100 bite wounds.

Her mother can’t touch her for fear of spreading an infection.

“None of us is functioning right now,” said Barbara Brown, who is 73, with health problems of her own. “We’re just in limbo.”

She said her daughter does not work, but previously served in the Army and was a housekeeper at Parkland Memorial Hospital. She’s a mother and a grandmother.

She’s barely clinging to life because of one of the most gruesome dog attacks that Dallas has seen. But reports of dog bites are not uncommon, particularly in parts of southern Dallas where dogs regularly wander.

For example, less than 24 hours before she was mauled, a man in Oak Cliff told police that a pit bull charged at him so relentlessly that he tried to climb on a utility box to escape. When that didn’t work, he jumped into the bed of a truck. Even then, he suffered injuries, police noted, with visible scratching and swelling on his calf.

Rawlings said the city must improve coordination between police and Dallas Animal Services.

911 Calls: Antoinette Brown Begged ‘Somebody Help Me’ While Pack of Dogs Fatally Attacked Her 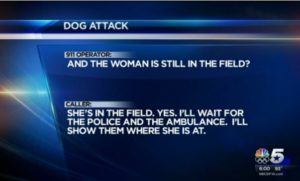 Distressed neighbors who called to report a woman being attacked by dogs in South Dallas last month had to listen for minutes while the woman screamed and the pack ripped her apart, according to 911 calls released to The Dallas Morning News on Tuesday.

The recordings shed light on the excruciating attack that killed 52-year-old Antoinette Brown on May 2. Her family said she was bitten more than 100 times by dogs who devoured her as if they were “eating a steak.” 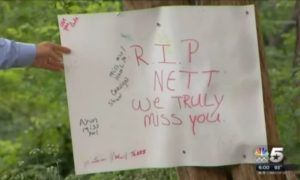 DALLAS (CBS11) – Mauled by a pack of dogs in southeast Dallas, Antoinette Brown, 52, passed away on Monday after a week-long battle for her life according to her son.

Investigators said Brown was discovered in a field along the 3300 block of Rutledge Street.

Brown remained hospitalized for a week but never regained consciousness.

“That’s a shame right there. She just stayed right down the way and they just caught here at the wrong time,” said Ollie Morgan, a neighbor who knew the victim. “People couldn’t help her because once the walked over, the dogs turned on them. It’s just a bad way to go.”

The Breeds of Dogs Seized

What is also known about the attacking dogs to date, thanks to the June 10 update by Dallas Morning News columnist Sharon Grigsby, is that the dogs were quarantined for 10 days, assessed unadoptable and euthanized. The DNA tests are still being analyzed at the Southwest Institute of Forensics Science. Results were anticipated to take about eight weeks, so we expect news in July. When results are complete police will determine if a criminal case can be made against Cardoso. 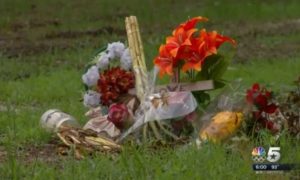 No criminal charges will be filed in the mauling death of Antoinette Brown after forensic tests failed to establish a link between her injuries and the dogs suspected of attacking her, Dallas police announced Monday.

Police plan to close the case after separate forensic analyses came back negative, meaning authorities cannot say for sure whether the dogs they seized and euthanized were the ones that attacked Brown.

They had been pursuing the case as an “attack by dog,” in which a dog’s owner can be held criminally responsible if a dog makes an unprovoked attack that kills or seriously injures someone. It’s a second-degree felony if the attack causes death.

Brown, a 52-year-old homeless veteran, was attacked May 2. She begged for help while a pack of dogs descended upon her in a South Dallas field, tearing away large chunks of flesh and leaving bone exposed. Her family said she was bitten so many times that the doctor stopped counting at 100 bites.