Deputies were called about 4 p.m. Saturday to the 500 block of North Gertrude Avenue

Neighbors said the man, identified as Earl Stephens Jr., 43, of Stockton, was visiting a friend, who owned the pit bull, and was walking to get something out of his car when the dog attacked, according to the San Joaquin County Sheriff’s Office..

Stephens’ wife and the owner tried to get the dog off Stephens, but the dog also started to snap at the owner, neighbors said. Two pit bull puppies also attacked the victim but were eventually pulled away.

A pit bull killed a man in Stockton on Saturday, according to the San Joaquin County Sheriff’s department.

Just before 4 p.m., deputies found Earl Wayne Stephens Jr., 43, bleeding from multiple dog bite wounds in the 500 block of north Gertrude Avenue. In an attempt to save Stephens, the officers shot and killed the dog, who was still loose and aggressive in the yard, a department press release said.

Stephens was transported to a local hospital, where he later succumbed to his injuries.

Deputies arrived to find a “loose and aggressive” pit bull in a yard as the injured victim, Earl Wayne Stephens Jr., lay nearby, the sheriff’s office said. 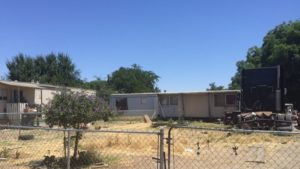 In order to reach Stephens and render aid, deputies had to shoot and kill the pit bull, the Sheriff’s Office said.

Stephens was taken to an area hospital, where he later died.

Neighbors told KOVR-TV that the dog’s owner and Stephens got into an argument before the pit bull attacked.

Deputies said they are still investigating the mauling. No arrests have been made.

The pit bull was loose in the yard and acting aggressively, according to deputies, prompting them to kill the dog in an effort to save Stephens. Stephens was taken to a nearby hospital where he later succumbed to his injuries.

Ezekiel Steffens-Goeas, 31, a neighbor and the son of the woman who called authorities, said the pit bull was named Harley and was about 2 years old. He said Harley was the father of two puppies that also joined in the attack on Stephens. Those puppies were removed by animal control officers. 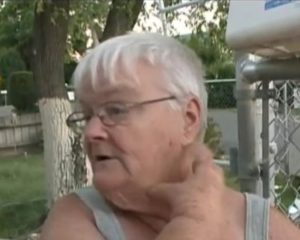 “I know the dog; the dog knows me,” Steffens-Goeas said, hesitant to describe the dog’s general demeanor. “It depends on how you raise the dog and how much time you spend with him.”

Steffens-Goeas, who arrived home minutes after the attack, said his mother heard the commotion and a man yelling for help. He said it took 10 minutes for that help to arrive after his mother called 911.

He said the dog’s owner and another person, possibly the victim’s wife, attempted to pull Harvey, away but the dog turned on them before going back to Stephens. The attack reportedly took place in a confined area between the home and the front of a semitractor parked on the fenced property.

“By the time (deputies) got here, the guy was gone. They revived him but he died again. I guess he lost a hell of a lot of blood,” Steffens-Goeas said.

“I send my condolences out to the family. I don’t wish that on anybody,” he said.

‘Repairing a Scooter’
UPDATE 06/06/16: Earl Wayne Stephens Jr., was helping a friend repair a scooter in the friend’s front yard on Saturday in east Stockton, the local paper reports. “Little did anyone know it would be the last thing he ever did,” states the Stockton Record. Both men were inside the friend’s home on North Gertrude Avenue at about 3:45 pm, when Stephens went outside to get some cigarettes from his car, according to Deputy Les Garcia with the San Joaquin County Sheriff’s Office.

As soon as he stepped outside, the pit bull, named Harley, viciously attacked him. The Record reports the dog had been friendly to Stephens earlier when he was out in the fenced yard. After hearing the attack, Stephens’ wife and friend rushed outside to help. The dog’s jaws were clamped onto Stephens; the two tried to pry them loose. His wife was bitten on her fingers in the process. She also accidentally struck the dog owner’s head with a hammer that she was using on the dog.