A very tragic event has hit the Navajo Nation once again

A 3-year-old boy was mauled to death by 12 pitbulls in Seba Dalkai, AZ on the Navajo Nation, reported the Navajo Times.

Kimasha Begay told the tribally owned newspaper, her son Kayden Coltor Begay was visiting his paternal grandparents when according to Kimasha, her son slipped out after his aunt, who was checking on the cattle only to be found mauled by the pitbull dogs.

“From what I was told, the aunt didn’t know Kayden had followed her,” said Kimasha Begay, holding back sobs. “She turned around and saw the dogs gathered around something. She went to see what they were doing, and that’s when she found my son,” said Begay in the Navajo Times.

According to the Times, Kimasha Begay said she was told the left side of Kayden’s face had been torn off and his thigh was gnawed to the bone.

A go fund me page was was created by the family and can be found online at, ‘Funeral Expense for Kayden Begay.’

Part I of a three-part series. 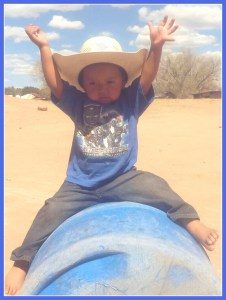 Kayden Begay,  of Seba Dalkai,  Arizona,  a remote crossroads consisting of little more than a school and post office,  was at least the fourth person to be killed by free-roaming dog packs on the Navajo Nation since 2010,  but was the first killed in an incident in which the attack was witnessed and the dogs were identified.

My Name Is Kimasha Shorty.. Im mother to Kayden Colter Begay. He was 3 yrs old. His birthday was on 03/19/13.  He loved to ride horses with his uncles Dendrick and Deon Begay. He loved his Nali David and Sharon Begay so much.. He was well known thru the NAC world with his nali. He loved to drum and shake the gourd while his nali sang with him.. His hobbies were to watch Bullriding with his uncles and aunties and especially His grandparents. His love for everyone around him was amazing and was never shy to speak his mind…
His tragedy is not appreciated although being attacked by 12 pitbulls is very hard to take in as a mother. We have a heavy heart right now filled woth so much sadness. Although we have anger building up within ourselves but will continue to do our best for him and have im laid to rest.
The money will be used towards funeral expense and other costly expense with what is needed to have him laid to rest.
This means so much to me although nothing will replace my baby boy, however from the deepest of my heart donations will be greatly apprecieated. Im very thankful for all the kind words and donations that will be made towards this sadness…. im a mother asking for help..

Citing the report, Navajo President Russell Begaye said that five dogs mauled the boy before officials arrived. Two dogs were shot on scene and three were taken into custody and euthanized at an animal shelter in Fort Defiance, Arizona, according to the report. All five dogs tested negative for rabies. Cecil Hubbell Sr., president of the Navajo Nation’s Wide Ruins Chapter, said people told him they had reported these dogs before, but officials took no actions until the boy was killed.

The Navajo Nation is about 27,000 square miles — larger than West Virginia — with very limited resources. The Navajo Nation Animal Control (NNAC) web page states they only have five officers for the entire reservation.1 In a public message plea for more funding, NNAC states they currently lack the ability to provide services in key areas including: aggressive enforcement of laws, livestock damage investigations, animal-bite investigations, quarantines and much more.